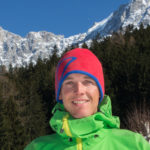 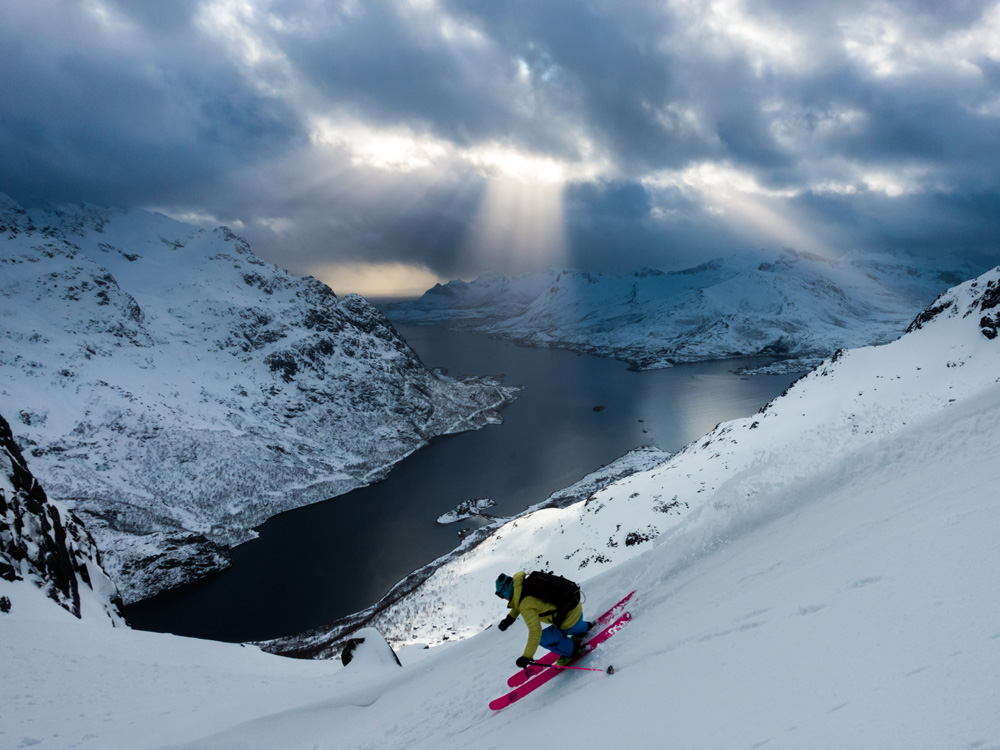 The magical archipelago of the Lofoten islands extends for 150 km and is located at 68° north on the west coast of Norway. Despite being in the Arctic Circle the islands benefit from an anomaly, the presence of the warm Gulf Stream, and its extension, the North Atlantic Drift, which keeps the Arctic cold at bay and keeps temperatures more akin to those found in Scotland 10° further south. The mountains are alpine like, rising straight from the sea giving a rugged coastline interspaced with deep sheltered fiords and sandy beaches with clear turquoise waters. 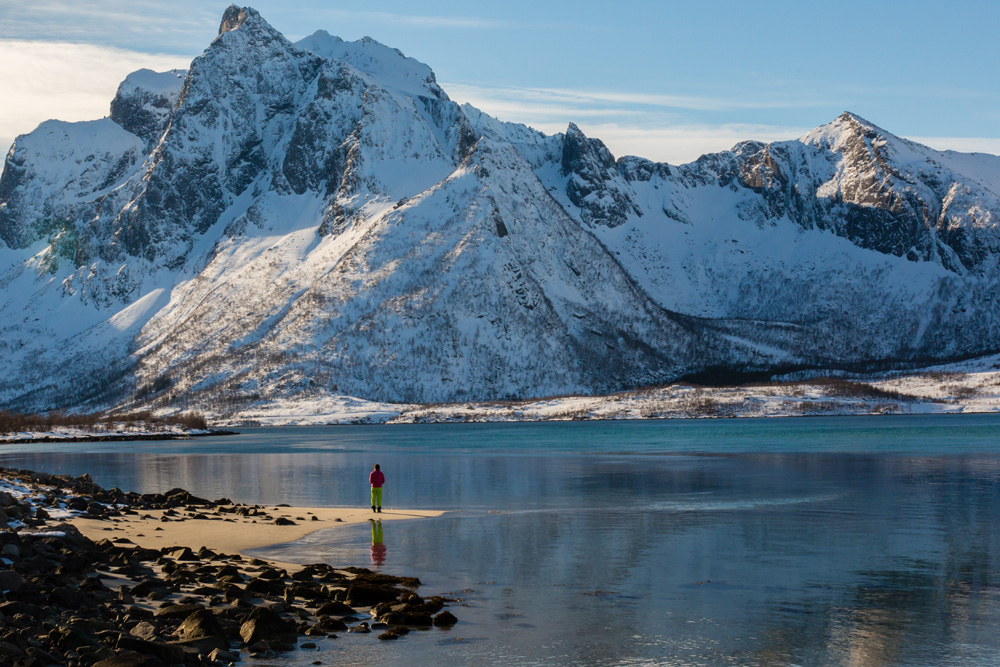 Michelle falling in love with the vivid colours and rugged beauty

For centuries fishing has been the main source of food and it remains the main industry. The north east Arctic cod makes a migratory journey from the Barents sea to spawn in the Lofoten waters and fishing this cod run has become a traditional event that provides stability to the local economy. The cod is preserved by hanging it our to dry on huge racks which are visible at every port. Like any commodity in the far north, nothing is wasted and the heads are dried then ground up to make fish stock which is exported to Africa.  The Norwegians adhere to tight fishing quotas to manage the stocks in a sustainable manner, and you may be surprised to learn that the highest quality red meat you are eating is actually Minke Whale.

Here its common to see 40-foot trucks with spiked tyres thundering along the impressive road network, which connects the islands by tunnels under the fiords or bridges over them. That road network means that almost any skiing zone can be accessed in a day hit, and it doesn’t require an early start. Lofoten must be one of the few places where the mountains look bigger than they actually are and it was a welcome break to find us gaining the tops in 2-3 hours rather than full day slogs and this added to the relaxed unrushed feel! 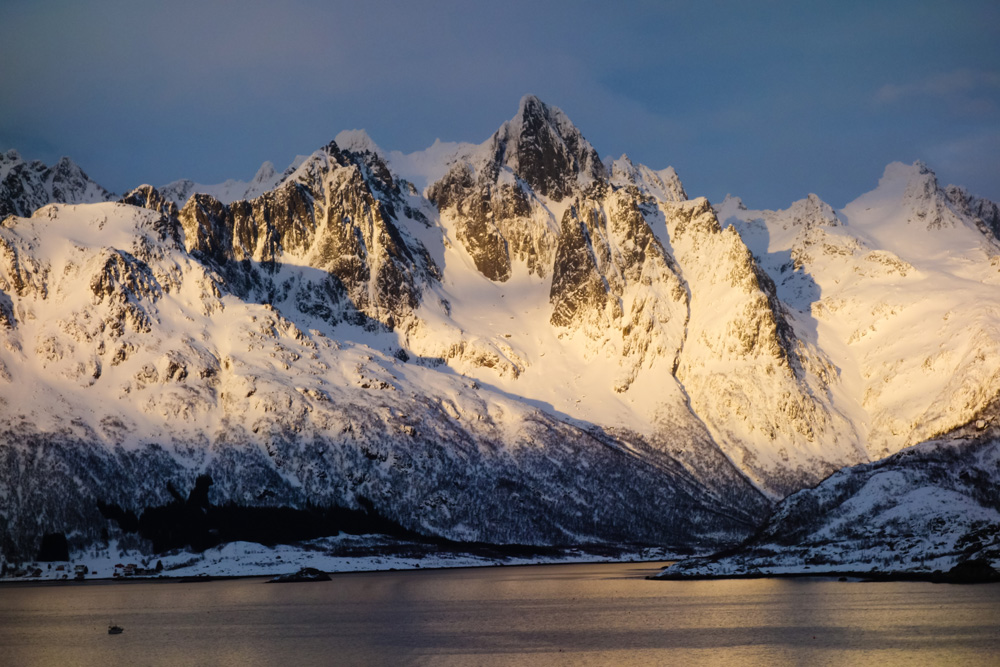 As with any west coast there is no shortage of precip and the average is around 130 mm / month for the months of January, February and March. That roughly equates to 1.3 m of snowfall per month! We headed up there in mid March to benefit from colder snow and dark nights in which to view the Northern Lights or Aurora Borealis. 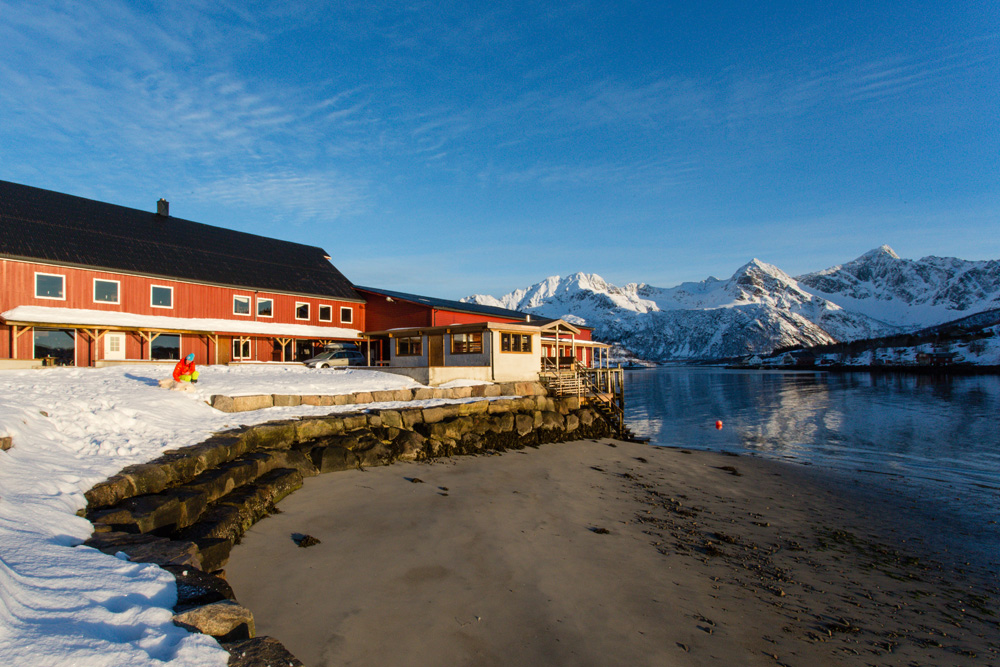 There are many options for accommodation and we elected to stay at the beautiful Lofoten Ski Lodge that is run by the charming couple of Maren Eek Bistrup and IFMGA mountain guide Seth Hobby. They provide a fantastic homely relaxed atmosphere that allows you to completely unwind and adjust to the natural rhythm of the days in the far north. The lodge is located on the edge of an idyllic bay surrounded by snowcapped mountains and everyone stays in their own cosy log cabin on the shore. Waking up involves drawing the parting the curtains and being greeted with beautiful views over the bay that included in our case, Bob the heron on his morning fishing trip. 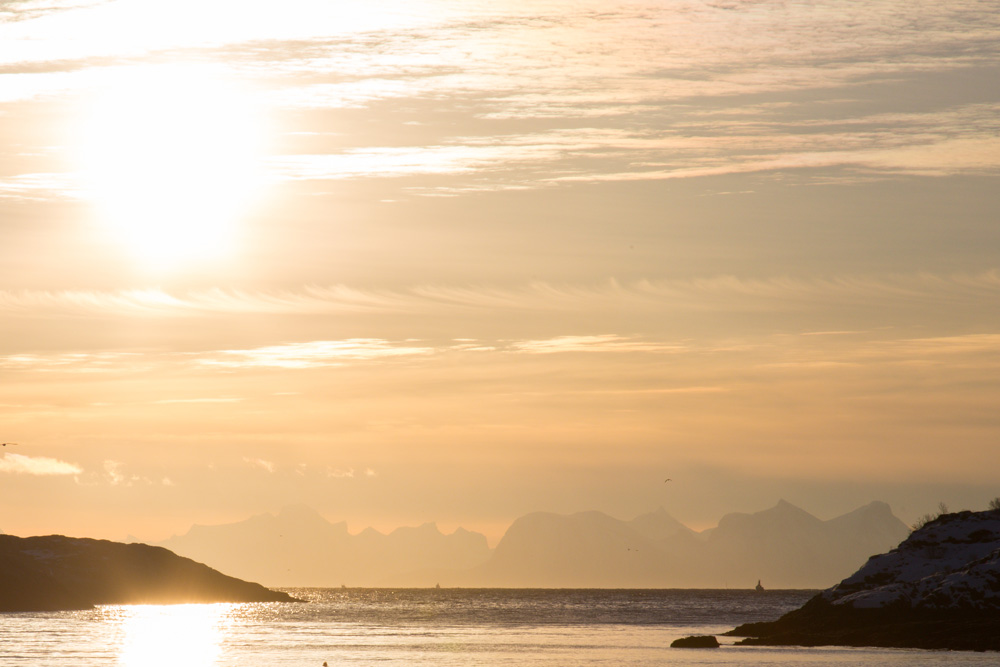 We started the day with a hearty breakfast, to fuel us for a good day’s ski mountaineering. From the table we would be awestruck by the sunrises over the ocean and the ‘magic mountains’ on the mainland beyond which called out to us with the promise of adventures.

After breakfast Seth then gives you the beta on the best places to ski or sorts you out with a guide who knows where to go. Michelle and myself were first timers in Lofoten and not only did we not know the lay of the land but we also didn’t know what had been skied and what was waiting a first descent. We’ve all done trips and got frustrated trying to figure out where the goods are found and our short trip meant we had no time to waste getting in wrong. This is where Seth’s intimate knowledge from many years in the far north was priceless and he selflessly shared this with us giving us the steer on many unskied lines. Now that is normally an incredible act of generosity in usual circumstances, can you imagine giving away all those ski lines you had looked upon and stored in the back of your mind for he future?  What made it an extraordinary selfless act was that Seth had suffered sofa surfing knee injuries last season and again at the start of this season when he fractured his tibial plateau on an innocuous rock on the James Bond track down from the Vallee Blanche. Seth would definitely have fitted in well with the Jedi. I could only hope I would be as generous and graceful if our roles were reversed. For day after day we went out and skied his lines until one day I came back with a photo of 3 long beautiful couloirs on the other side of a fiord. I showed Seth my photo, eagerly enquiring into how to access these lines and if a boat was required. Seth’s eyes lit up and he turned to me and said ‘those, my friend, are mine’. You just have to respect that, and somehow live with the guilt for robbing him of several other first descents. I think he was stoked for us enjoying the highlife in his zone but everyday when we returned smiling from ear to ear I could feel his pain. 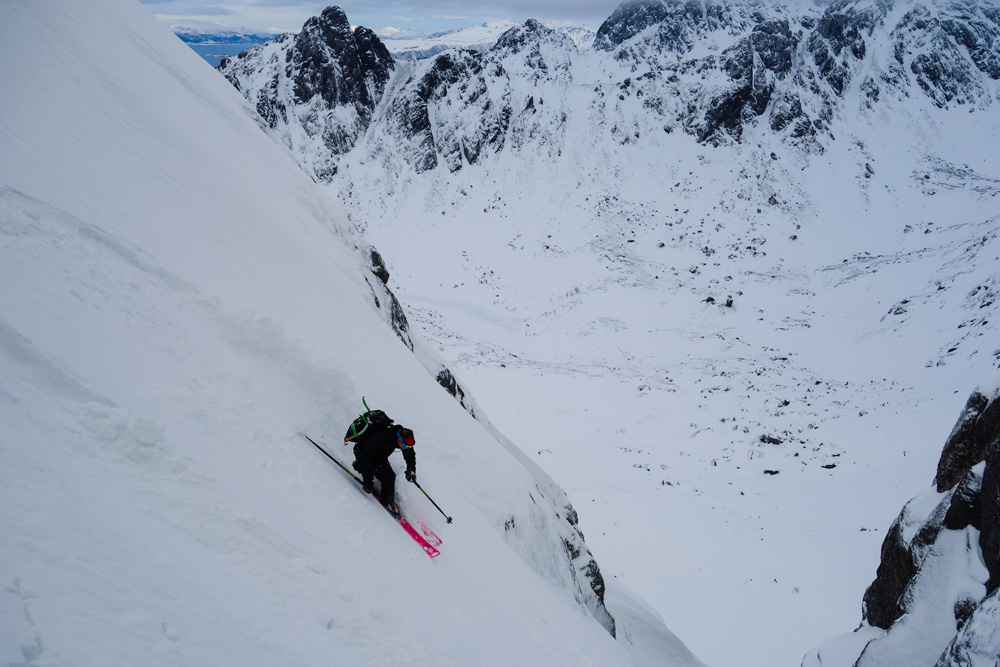 Ross Hewitt on a stormy day in Nilsvitinden’s north cirque

The first few days were all about stormriding but the maritime snowpack settles quickly and we toured into the north cirque of Nilsviktinden and found 3 virgin couloir each around 500 m. The rock walls provided good relief in the stormy weather and cold new slow was sensational to ski.  After a great days skiing we would be treated to afternoon tea and waffles before relaxing in the sauna with a beer and bracing ourselves for the cold shock of jumping in the fiord in true Viking style. Finally we would be treated to a big 3-course meal and as if on cue, the Aurora Borealis would appear around 9 pm and we would spend an hour gazing and wondering about this remarkable phenomenon. 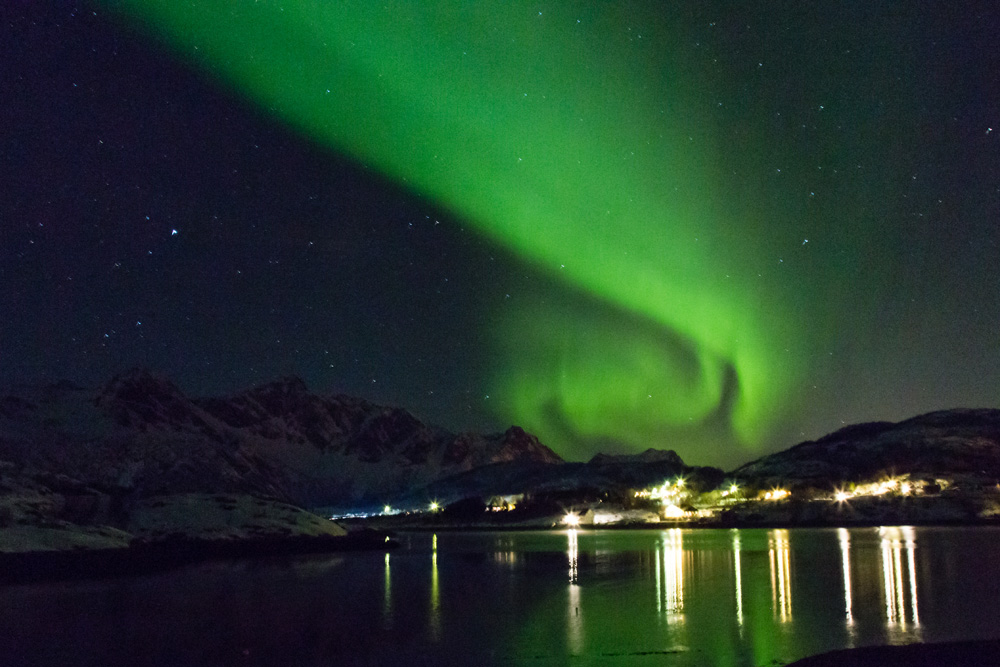 During the middle of our week we received some bluebird weather and Seth sent us questing off to Breitinden in the north with a caveat that the approach might be marshy and ‘I’m sure there is something up there’. So we quested off and successfully negotiated the wetlands to find a brilliant cirque with another beautiful line filled with perfect powder.

Later in the week broken skies meant we were treated to the ever-changing light that the far north is infamous for. Shafts of sunlight would pierce through the moody clouds and reflect off the fiords and we scored a final run down the classic south couloir of Geitgalien. Finally our luck ran out and with the rain it was time to check out the beaches and local surf spots! 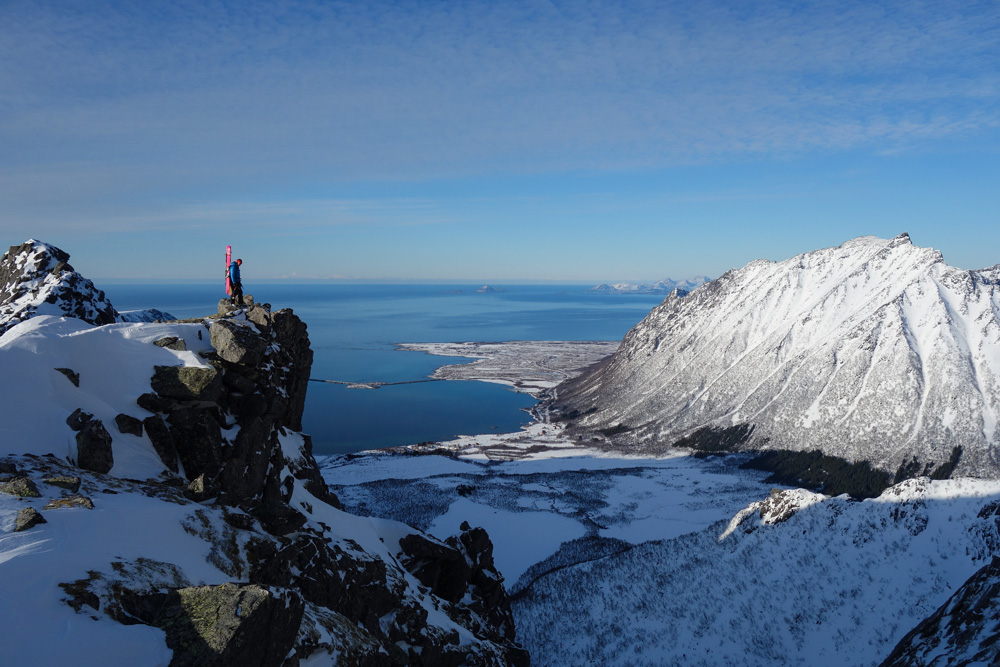 Ross Hewitt looking down into our line off Breitinden 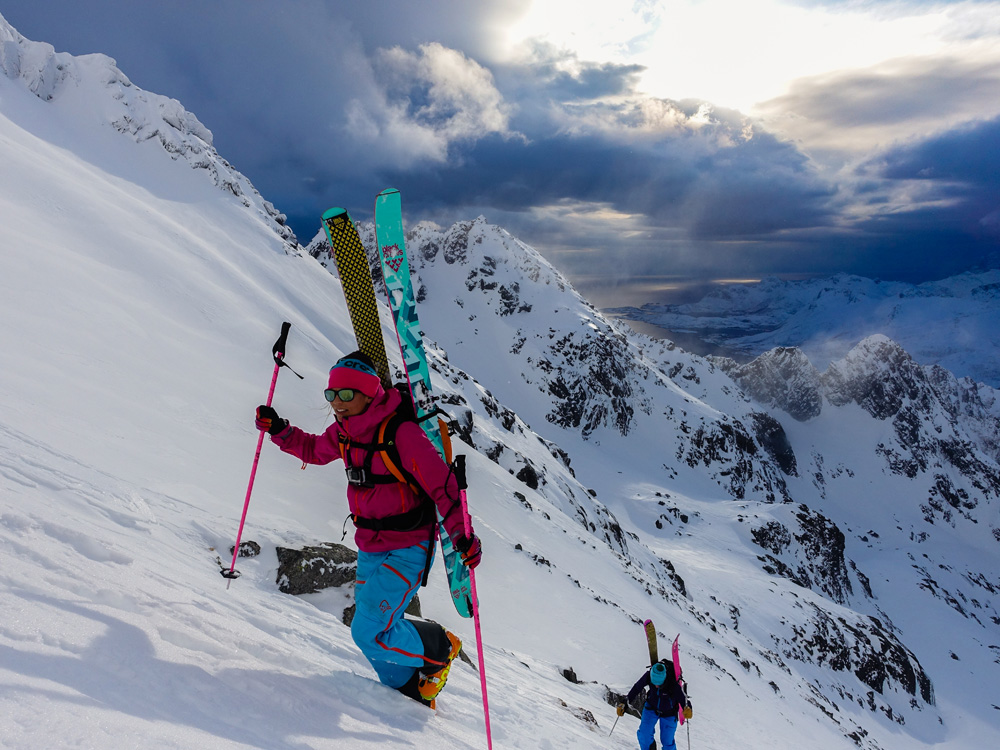 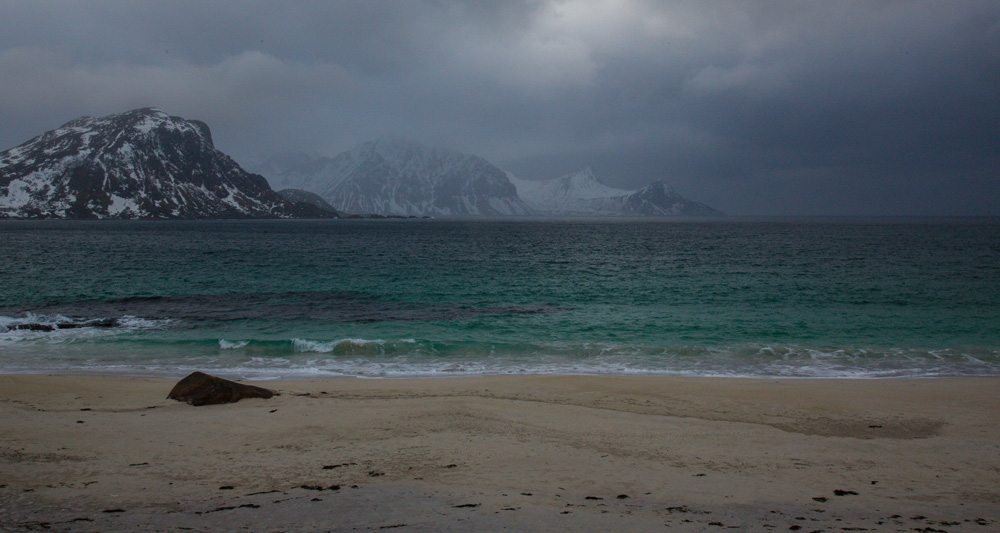 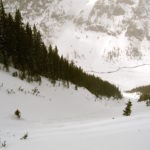 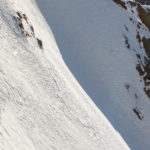 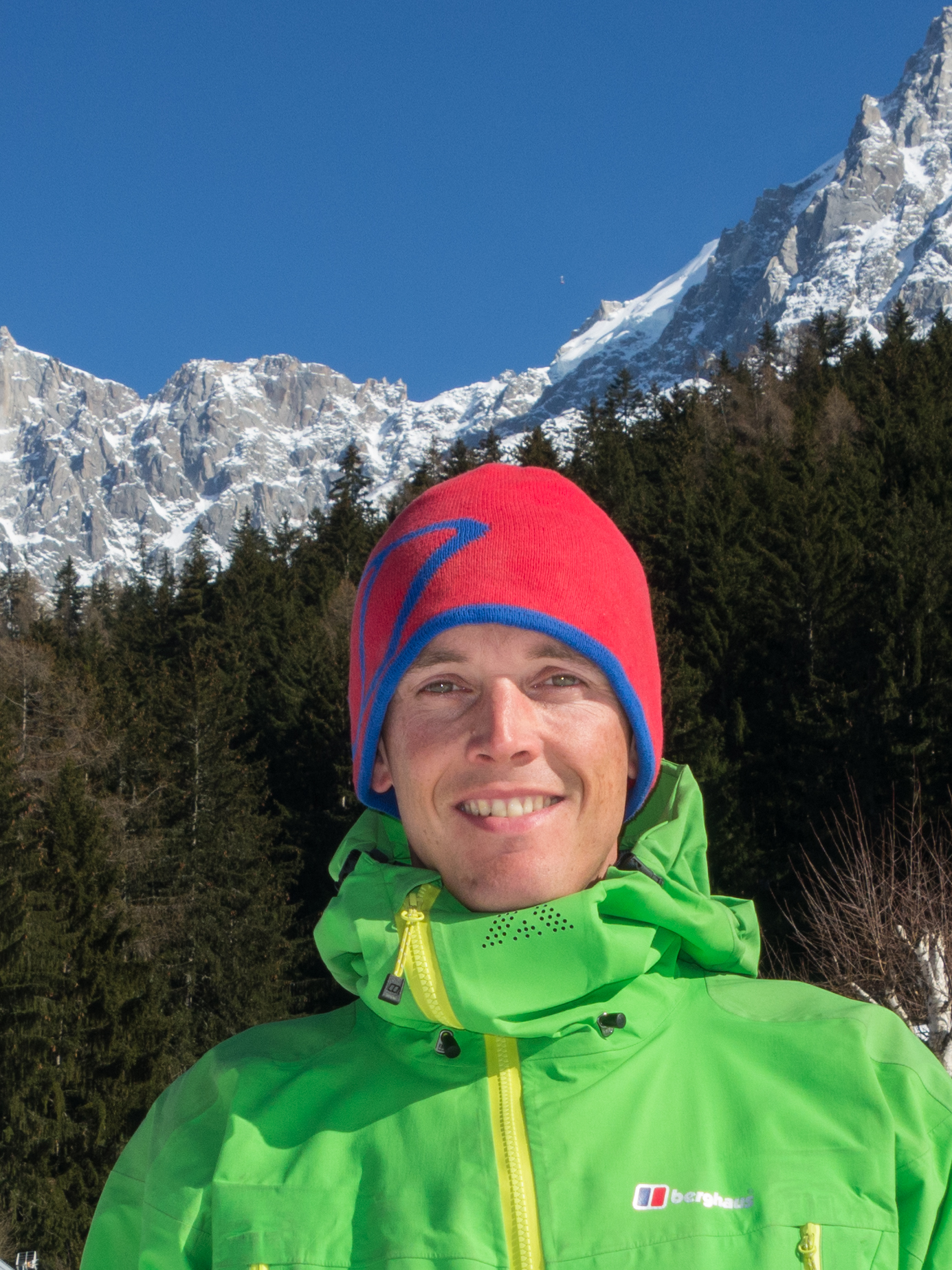 What trends have you noticed in your backcountry community?

In Europe are starting to see many brands dictate that their athletes were helmets and to meet the demands of the backcountry skier, dual rated helmets have arrived on the market (meeting the standards EN12492 for mountaineering and EN1077 skiing). With wider skis allowing us to tour right from the first snowfall, protecting ourselves from the sharks has to be a good thing, right?

Do you find a big difference in a avalanche danger between the snow pack at Chamonix and lofoten?