It Always Snows When I leave Town

I am cursed. The open highway rolls out before my car’s hood, stretching into the desert until it disappears on the horizon. Road music spills from blown-out speakers. Mountain bikes are on the rack. Camping gear is piled high in the back. A long weekend of riding singletrack is on the agenda. I tap my fingers on the steering wheel when a favorite song comes on. Despite my stereo belching bass notes that sound like a child squishing chocolate pudding through clenched teeth, I am content in this moment. Until, that is, a snowflake lands on my windshield.

Absolutely nothing ruins a spring trip to the desert like knowing that powder is puking in the Wasatch. My curse, is that it always snows when I leave town. Every. Single. Time. The curse goes something like this: snow hasn’t fallen in the mountains for a while, so I get antsy and plan a trip to Moab, St. George or some similar red-rock locale to wear Chacos, sit in camp chairs, pedal real fast, and generally become a sunbathing lizard for a weekend. The trip is penciled into my calendar a few weeks away. Invites go out to friends. Friends answer back with exclamations of stoke. No cancelling now… even if it does snow. But it always does.

Commitment aside, I still check the weather forecast for the Cottonwood Canyons every day. Call it a habit. As I get closer to the trip date, I see the jet stream start to move, a high pressure system blowing away, and a lineup of storms marching east from the Pacific. I try to pretend that I don’t know what’s coming, convince myself that the storm will perform the usual Wasatch split, or simply fizzle out. That never comes to pass.

Before leaving the house with bikes instead of skis on the roof rack, I give weather websites a perfunctory look and focus on the chance of rain in our chosen destination. But a quick click on the Wasatch always shows what I fear the most – the biggest snowstorm of the season, with powder measured in feet not inches, will hammer ski resorts and favorite backcountry zones during the exact timeframe that I won’t be around to ski it.

It’s as if Ullr, the Norse God of Snow, is watching me through his magical Valhalla spyglass all season long. He zooms in on me as I pull the trigger on a trip, holds back the storms like a kid damming a creek with an old piece of plywood, then releases the torrent as soon as I back the car out of the driveway. I can almost hear him taunt me as he rides a wave of dark clouds on an inner tube while I curse, hunched beneath my cracked windshield as fat flakes collect atop wipers that desperately need replacing.

Hell, it doesn’t even have to be spring for the curse to strike. Looking back at old calendars, it’s depressing to see how many powder days I’ve missed. Several times my absenteeism resulted in epic storms before Christmas, and even in mid-winter. Take the notorious snowstorm in late December, 2003. Three feet of snow fell in the Salt Lake Valley, four feet buried neighborhoods on the benches, and Alta got over seven feet of powder in six days. This happened between Christmas and New Year’s. Guess where I was? Home for the holidays.

I was counting my presents and ingesting too much beer and gravy at the in-laws place during Christmas of 2012, when Brighton reported 21 inches on December 27th. I’ve even been skunked as recently as Thanksgiving week, 2014, when 42 inches fell over five days in upper Little Cottonwood Canyon. The snow came in so hard that Alta had to close two days after opening because of avalanche danger. I guess that was sort of a consolation, because I happened to be in Seattle. Sure, I had a spanking-good time drinking coffee at Pike Place and hanging out with a wonderful family. But I still wasn’t skiing.

Everybody should thank me, really. Because this bad luck has shrouded my soul even during our recent drought years. If you’re a skier in the Wasatch, I’m doing you a favor by leaving; not because my neighborhood suddenly smells better when I depart, but because packing my bags seems to be an unintentional snow dance that results in copious amounts of sky flakes that flutter down like feathers onto any location where I am not.

Back in the desert, skies are overcast, and the night is crisp. I crack open a beer, shift my gaze to the campfire, and toast to an excellent day of riding bikes. It’s cold enough that I’m performing the art of campfire-dance where I warm my back against the fire for a few minutes, then turn around to warm my front. This goes on for hours and is only interrupted by the escape-the-smoke-that-follows-you dance. I am happy. It’s helping me to forget that everyone is probably drowning in face shots just a four-hour drive north. Forgetting is a slow process. Hopefully my brain will blank-slate itself completely by tomorrow when I’m pedaling again. I just have to stay off Facebook and Instagram the rest of the weekend. I take a swig of beer, watch my friend’s smiling faces aglow in flame that’s disturbed by a gentle breeze, and decide that coming here was a grand idea. I am content in this moment. Until, that is, a snowflake lands on my sleeve. 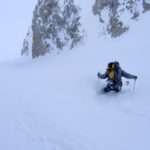 Previous post The Hut Journal- The Green-Wilson and Friends Hut 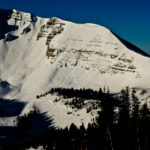