Some years ago I had a potential job opportunity in one of those handful of cool western mountain towns and was pressed to evaluate the opportunity as it related to my life. All of the usual factors came into play: salary, professional growth, cost of living, leaving friends, the pain-in-the-ass (PIA) of moving, etc. It was a big decision; indeed, where we choose to live is one of the biggest decisions we make, and as such it’s pretty scary, even as it’s mandatory. As I tried to mentally weigh the advantages and disadvantages of living other places I realized that I valued some of the aspects of them moving more than others, but it was difficult to prioritize those values in my mind. As I juggled the important aspects, I also realized that even as I tried to tell myself it wasn’t that important, there was one overriding element to my Big Life Decision: how is the skiing?

It is no coincidence that after growing up in the Pacific Northwest my brother, my wife, and myself all ended up in Salt Lake City. We learned to ski on Mount Hood and White Pass, respectively, and over time we realized that as great as skiing was in general, between the terrain and the snow it was simply better in Utah. As I gravitated away from resorts and into backcountry skiing this became even more acute: relatively speaking, the drives to the Oregon trailheads from the population centers are long and the slogs in to the shots are just as long, but at least the terrain is lame and snow is heavy. Nearby Washington’s bigger and more prolific mountains represent better skiing opportunities, but again….after a couple of visits to Utah it was clear to us that there’s a reason backcountry skiers choose to both live and vacation there. 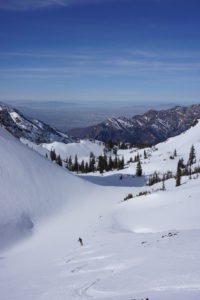 Ahhh, the Wasatch! Silver Fork, Days Fork, Kessler, Cardiac, White Pine, Gobblers – all riddled with thousand-foot-plus, mid-30 degree shots and more chutes than you can point your stick(s) at, and all blessed with consistent dumps of sub-6% blower powder. And it’s all within a short skin’s distance from a road, that in turn is only a half an hour drive from any point in the Salt Lake Valley, which is rife with plenty of “real” jobs, a non-mountain town cost of living, and quick access to an airport hub. What’s there not to love? Well, as it turns out…..plenty.

Just as Utah loves to tout its “Greatest Snow on Earth” it’s almost as equally legendary for its midwinter pollution-laden inversions that create asthmatic kids and perpetual cold symptoms for all. Every winter Salt Lake has days – even weeks – when it has the Greatest Pollution in the Country (they didn’t put that on the license plates). Then winter’s PM 2.5 count gives way to summer’s high ozone levels that is equally as bad or arguably worse because mountain types can’t escape it (ozone rises higher than inversions). The summers are scorching, Utah’s drivers are as bad as its powder skiers are good, and with a million people blasting around the valley the traffic in town can be hellish, and since among that million people many are skiers the infamous “red snake” of canyon traffic jams bites ever-more-often.

As backcountry and side country skiing has grown in popularity, those easy-to-access, powder-filled lines that are practically within sight of the valley have gotten crowded. Parking at trailheads begins regularly by 6:30 am, and it’s literally a challenge to find untracked lines a day or two after a midweek storm in areas that used to stay fresh for close to a week. And if you’re one of the many who are weekend warriors, your ability to actually execute on what backcountry skiing is about – that is, skiing in relatively untrammeled areas  – has become very limited. So the question becomes one of values: do I ski – and live – in a place that has terrain, snow, and access in abundance, or do I ski – and live – in an area that compromises one or more of those values but generates another important value: lack of crowds and competition? 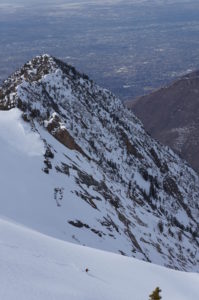 Recently a few friends have very purposely moved away from the Wasatch to the base of the Manti-LaSal Skyline area (huh? where? is there any skiing there?) with the full understanding that even as skiing is a focal point of their lives, they were becoming the grumpy, anti-social skiers they didn’t want to be after too many years of bouncing off too many people.   We visited them this winter to see what it was about, and it was an interesting study: indeed there was plenty of snow, there are virtually no other skiers (“when we see people we are excited: someone to ski with!”), and the cost of living is really low….but they live in rural Utah. Which, by definition, means that they are far from good restaurants, brewpubs, concerts, airports, good-paying and interesting jobs, like-minded recreationists, bike shops, sweet singletrack, and the terrain was comparable to the mellowest terrain in the Wasatch and required sledding in to get there. But they are happier: basically, being sub-par in some aspects of their skiing – and their life – outweighed the urbanesque aspect of living and skiing in the Wasatch.

I have friends in Vermont who would not trade any of their big powder days on the new glades they’ve been cutting for anywhere, and their New England roots are far too deep to dig up, even as they complain about 50+ degree mid-winter temperature swings, if they even get a winter at all. Coloradans love to live high (so to speak) and they gobble up their big spring descents, but that I-70 traffic, crowds on Berthoud Pass, and/or the continental snowpack all seem challenging. Californians have great terrain but six-year droughts suck almost as much as the I-80 parking lot. Jackson and Cooke City certainly have the terrain and snow, but just thinking about being there midwinter makes my fingers and toes turn ice cold.   Revelstoke BC seems pretty ultimate: 45 minute access to Rogers Pass, other lesser-known but nearly-as-big areas nearby, and a ‘tweener snowpack that gets maritime amounts but continental densities. However, when I was there this past February it was pouring rain, Rogers was almost as tracked out as the Wasatch with permitting to boot, and we realized you better like Revelstoke because getting there and away is a big challenge. 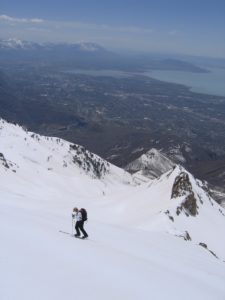 So where to live, where to ski? When I pondered the potential move I decided to geek out and create an Ultimate Place to Live spreadsheet, with spaces for any categories desired (job opportunities, school quality, mountain biking, golfing, ballet-attending, political environment, whatever) and the ability to weight those categories accordingly, and then plug in the place to live and rate each locale’s category, which would therefore generate an index to hopefully objectify the decision. And it helped, a little….but what I realized is that there is no “Ultimate”; every place has its advantages and disadvantages, and both old timers and newbies need to maximize the opportunities and mitigate the downsides.

So I’m still in Salt Lake. Sure I grumble about the various ills associated with too much pollution and too many skiers in too small of an area, but the skiing is still great, even as I continue to fool myself that there might yet be the Ultimate Place To Live…and ski. 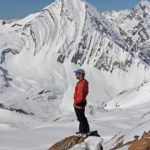 Next post Escaping Reality at the McGillivray Pass Lodge