Backcountry skiing made me eat in a toilet.

Okay, alright, backcountry skiing isn’t directly involved, and the meal in question isn’t actually eaten in a toilet, but half-truths make better stories. And while the transcendent experience of ski touring remote mountains provides fodder for skin-track denizens to spin a good yarn, more often than not it’s the post-tour, ale-fueled antics that tattoo permanent scars into our grey matter. Usually such tales are best left untold. As for my toilet food, sometimes you just have to accept what’s handed to you.

So where to begin… the Leaning Tower of PBR? Drunken confessions of college hedonism? The start of the trip perhaps is best. My buds Mike D and Adam have joined me on a bike and boards weekend in Moab. Day one is spent rolling fat tires over slickrock and singletrack on new trails at Klondike Bluffs and Amasa Back. While the mountain biking is a nice diversion, the snow-capped La Sal Mountains sing to me from the horizon. As John Muir famously said, “the mountains are calling, and I must go.” Good thing we brought our skis to the desert.

Day two, we drive up the serpentine, dirt road to the Geyser Pass winter trailhead. Exposed earth of red rock and dusty green sage pass by as we ascend into the alpine in Adam’s “Yurt on Wheels,” so dubbed in a booze-fueled ceremony because the rig is a swank, ‘90’s-era, hard-top truck camper loaded onto a diesel Dodge pickup that’s so gargantuan, no self-respecting backcountry skier should be caught within a hundred yards of it. But that doesn’t stop envious looks of distain and barely-hidden jealousy from fellow skiers as we roll into the muddy parking lot. The Yurt on Wheels is literally a traveling ski hut; a base camp for every winter trailhead we can find in our exploration of Utah’s vast mountain backcountry. My love for this camper may only someday be dampened by revelations brought forth by forensic black light.

Our goal for the tour is Haystack Mountain. A lesser peak in the pantheon of La Sal radness, we settle on the destination mostly because we’ve skied everything else, and going where you’ve never gone before, despite the threat of sun crust and mank, can be a better motivator than seeking powder turns in a favorite, yet played-out, tree stash.

The tour goes according to plan: we skin to the top, drink summit brews, take pictures of red desert contrasting with a floating island of snow beneath our skis, and make turns that alternate between chattery and corny. It is a mountain adventure worth thousands of words published in a ski magazine if written by a scribe more endowed (mentally mind you) than I. For me, it’s the aftermath that plays muse.

Back at the Yurt on Wheels, we find ourselves completely alone as the sun melts beyond the west. It seems we have an entire mountain range to ourselves, and this knowledge plays passport to free-party reign without worry of disturbing any neighbors. Our sunset show is captivating, but I’m distracted by the fridge full of PBR. As we slouch around a wee camper table, a tower of leaning PBR cans grows ever higher. The game is simple: when a beer is finished, the empty can goes on top of the tower. Our drunkard Jenga ends when the last can makes the silvery tower fall. The loser must… damn, I clean forgot what the loser has to do. Too many PBRs.

Cheap beer in our bellies, we switch to brews of a finer choice purchased the day before at the Moab Brewery. We also hunger for food. Our sundries-run at the local grocer yields Bratwurst made from cows grass-fed at some free-range digs in Colorado’s Western Slope. Dirtbags we are not. But when I step outside the confines of our mobile ski hut, I’m hit by a cold, quick wind. The gusts are strong enough that the portable, gas grill won’t light.

I feel less of a man, and refuse to go back into the warm camper where my companions would surely jest at any failure to procure cooked meat. I move the grill beside a snow bank to block the wind, but the air eddies and flows like water around a rock, snuffing out any flame that I conjure beneath the sausages. Ashamed, I sulk into the camper and offer someone else a turn. Adam volunteers.

I should’ve known not to trust Adam. He’s a smart guy, but surfs through life on a wave of questionable judgment. With my own ability to differentiate intelligence from absurdity impaired by IPAs, I hang with Mike D and get lost in time. Before long, we wonder what is taking Adam so long. We exit into the cold, and see nothing but dark skies and the shimmering lights of Moab far below. No sign of Adam or our dinner. We walk along the now frozen parking lot, and see a faint, orange glow emanating from a window on the Forest Service outhouse. The glimmering flickers like candle light, and I catch a whiff of cooking meat.

Horrified, Mike and I run to the outhouse and throw open the door. Inside, the oh-so-familiar stench of weeks-old deuces hits us square in our nostrils. Shreds of toilet paper scatter on the concrete floor, and crusty layers of god-knows-what line the corners. And there is Adam, sitting on the toilet, diabolically illuminated by grill fire as he nonchalantly turns over a log-shaped Bratwurst with a pair of tongs. He is cooking our dinner in a toilet.

Backcountry skiing all day creates a mad hunger, and those Brats smell so good. The outhouse is a perfect wind shelter. Adam is sitting on the toilet, but his pants are thankfully not around his ankles. Imperfect judgment leads to a perfect solution. And post-tour, ale-fueled antics once again conjure up a story that transcends the skintrack. With a shrug in response to objections about poor sanitation and lack of human decency, Adam cheerfully hands over my toilet-cooked dinner.

I eat my sausage. 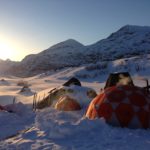 This is a hilarious read Jared!
I can fully picture Adam grinning on the toilet.