I heard screams from across the canyon. Distance and wind made the cries sound faint and far away. I stopped in the skin track to listen. At first I thought it was a skier whooping it up on a powder run. But a beat of silence, followed by an even louder scream of agony, confirmed my fear. Somebody was hurt.

The Boy Scout mantra, “Be Prepared” applies to backcountry skiing more than most outdoor activities. But seemingly all of our preparedness has an avalanche focus. The hordes of skiers traveling in the Wasatch Mountains that day probably had some level of avalanche education. But I’ll bet my bar of skin wax that most of them had zero backcountry rescue training. As for me, let’s just say I was never a Boy Scout.

I’m keenly aware of my level of ill-preparedness. There’s a lot of gear I should stuff into my pack in case of emergencies, but I choose instead to make room for whiskey and beef snacks. I was reminded of this that very morning on the skin track when a skier hurried past with a roll of toilet paper in his hand. He was clearly under a lot of pressure as he searched for a place to make a deposit in the middle of our watershed. I’ve never carried a jumbo roll of Angel Soft into the backcountry before, but now I thought maybe I should.

My buddy Mason and I were touring in a mellow part of Big Cottonwood Canyon called Powder Park. The zone is known for low-angle meadows. It’s a good place to ski when avalanche danger is elevated, or when we’re just not feeling “the gnar” and wish to minimize the chance of meeting up with serious trauma. But that’s exactly what we found after hearing those horrendous screams.

So we cut our ascent short and skied down to the canyon bottom. From the flats, we stopped to listen again. Up above, on an adjacent peak, I could hear a woman’s voice calling for help. We cupped our hands to our mouths and yelled back that we were on our way. As we frantically skinned up, my mind raced with worry. I had no idea what I would find when we reached this person, and I would have even less an idea of what to do when we got there.

The screams came from a woman with a severely broken leg. Her boyfriend had left her to find cell service at the summit. She was laying in the snow, shivering and pale with worry. As we approached, I took mental stock of what I had in my pack that could help her. I realized that I was of no more use to her than a St. Bernard.

The St. Bernard is a rescue dog bred by the hospice of the Great St. Bernard Pass on the Italian-Swiss border in the 17thcentury. The breed is a celebrity for tales of alpine rescues. According to the always reliable Internet, one dog in particular, named Barry, is credited with saving the lives of 40 people. The fable, of course, is that St. Bernards carried small brandy barrels around their necks to revive frozen travelers. No such account is actually true. This fallacy comes from a painting by English artist, Edwin Landseer called, Alpine Mastiffs Reanimating a Distressed Traveler. In it, two St. Bernards stand watch over an unconscious man in the snow. One is barking to alert human rescuers to their location. The other is licking the victim’s hand. Around its neck is the iconic brandy barrel. The St. Bernard has been depicted with these invented barrel collars ever since.

This same image of the legendary Alpine Mastiff and its cask of hooch occurred to me when I took off my pack, knelt down by the distressed woman’s side, and, like a Victorian-era gentleman, offered her a pull of whiskey from my flask.

That was not helpful.

She cried and swallowed her panic long enough to ask if we had any pain killers, and if either of us had medical training. Neither of us had. Then I had another idea. They say St. Bernards would also lie atop an injured person to keep them warm until help arrived. I chose instead to make her as warm as possible with an extra puffy jacket and a pair of down mittens that I keep in the bottom of my pack.

Her boyfriend skied down soon after (so I was really glad I hadn’t lied on top of her) followed by a ski guide he met at the mountaintop. The guide, a former ski patroller, was a godsend. He was clearly educated in outdoor emergency care. I watched in fascination as he pulled a SAM splint out of his pack to stabilize her leg. Then my jaw hit the surface hoar when he withdrew a rescue sled. It was basically a tarp with straps he affixed to the woman’s skis and poles to act as a frame. This incredible unit packed down to the size of a taco, and it enabled us to transport our immobile patient. I realized then just how deficient my own first aid kit was, especially considering that my only form of rescue gear was a few Voile straps and the aforementioned whiskey flask.

The rescue went swiftly after we used the sled to transport the woman down to an appropriate helicopter landing zone. Ski patrollers from adjacent Park City Mountain arrived, followed by a Life Flight helicopter that whisked her to the nearest hospital. Though I felt sheepish about my lack of helpfulness, her gratitude for the jacket and mittens made me feel like I contributed at least a small something.

I like to think I’ve done my due diligence as far as avalanches are concerned. I carry my beacon, probe and shovel. I know how to recognize avalanche terrain. I’ve trained in avalanche rescue scenarios. But on that day, an accident far more commonplace, like a simple broken leg, was enough to transform me into nothing better than a slobbering dog.

So I’ve determined to be more prepared. I’m making changes to what I stick in my backpack. I’ll stuff a SAM splint in there. Maybe some hand and foot warmers. And I’m seriously considering one of those packable rescue sleds. Hell, it’s probably an even better idea to take a wilderness first responder course. Because the next time I find myself in a rescue situation dealing with an injured skier, or, God forbid, myself, I hope to be of more use than just a whiskey-slinging, unhelpful St. Bernard. 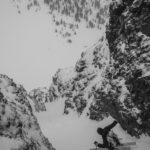 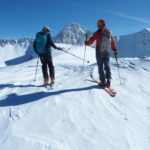