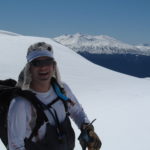 Tronador (Thunder Mountain) is a glaciated volcano perched on the border between Argentina and Chile.   As the crow flies, it’s no more than 30 miles to the west of the alpinist-mecca and tourist destination city of San Carlos de Bariloche. During the South American summer (December through February), Tronador is a popular trekking destination and, as such, features a sturdy mountain hut, or refugio (literally “refuge”) on its flanks.

While it offers no services in winter, the Refugio Otto Meiling remains unlocked and accessible to climbers and backcountry skiers looking to explore the alpine environment around the volcano.   Named for an eccentric, German-born mountaineer credited with many first ascents in the region, Otto Meiling sits well above treeline about five miles to the east of the summit massif.

I’ve been spending time in Argentina since the early 1990’s when my brother and I pulled off a budget trip when Argentina was a very expensive place to visit.   Since then, a series of economic crises have left the country with hyperinflation, an unstable currency, and a lot of political drama.   I also lived full-time in Argentina in the late 90’s, speak Spanish well, and have been blessed with some wonderful longtime Argentine friends.

It was with a few of my Argentine friends — Jeremias “Jere” Palavecino, Diego “Diegito” Simari, and Juan Jose “Juanjo” Puliafito — that I went to climb and ski the Argentine summit of Tronador in late September of 2017. Jeremias (“Jeremy” in English) owns a small trekking and ski touring business in Bariloche called Backcountry Patagonia, and is a smiley giant, at 6’2” one of the tallest Argentines I’ve ever met. Juanjo, a former university professor of philosophy , realized it was more fun outdoors than indoors and now works full-time as a trekking guide. Diego – small in stature but huge in skill and charisma – is a trilingual IFMGA-certified guide who won the coveted Piolet d’Or mountaineering award in 2016 for an ascent of the rime-encrusted Cerro Riso Patrón on the western edge of the Southern Patagonian Ice Field. 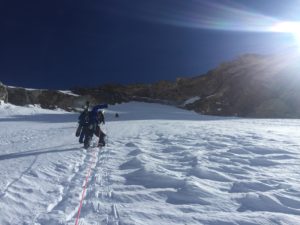 The four of us convened in the town of Bariloche, Argentina, where we purchased food, snacks, and mate at a small local market, and headed west on paved roads in Juanjo’s rustic Nissan pickup truck from the early 90’s. Maté is the national caffeinated beverage of Argentina, and if you want to keep a group of Argentines happy, you better have mate.   It’s a much friendly beverage than coffee or tea because it’s consumed via a single communal pipe and passed friend-to-friend.   And there’s a learning curve.   You add the water at just the right temperature and pour it in at just the right angle.   There’s a correct and incorrect way to accept it and to pass it on. Once you’ve finished your turn, you pass it promptly. Remind you of anything?

Continuing on a steep but well-maintained dirt road, we entered Nahuel Huapi National Park and passed a vacant ranger station, which serves as the normal winter parking area for the Otto Meiling Hut. Being springtime and snow-free at this elevation — and finding the gate to the rugged double track approach road unlocked and open — we decided to continue in the vehicle as far as possible.   The only problem with these unlocked gates in South America is that they tend to get locked behind you.

After a mile or two, the road became clogged with deadfall.   We were the first party to drive this road after the recent winter, and it hadn’t yet been cleared for the upcoming summer season.   Three of us got out and moved large logs and branches while Juanjo carefully kept advancing the vehicle.  Finally, we couldn’t proceed any further without a chainsaw, so we pulled into a tiny dirt alcove and parked.

We were in the middle of a temperate rainforest with huge expanses of bamboo, downed trees and dense underbrush.   We stuffed our backpacks with food, snacks, sleeping bags, mate, crampons, strapped our iceaxes and skis to the outside, and started to thread our way along the summer trail in what was basically a jungle.   Watching these guys nimbly scamper over the slippery moss-covered dead trees was my first indication that I was the least agile of the group.   And the oldest by about 20 years.

The mud turned to snow, and skis moved from backpacks to feet. But the deadfall stayed the same so now we climbed over large, slippery tree trunks on skis and skins.   Again, these guys would deftly climb up the trunks and hop off the other side.   I’d sit on my butt and awkwardly swing my legs over like an old man getting out of bed.

There’s nothing quite like the experience of serious bushwhacking.   It really keeps you in the moment. As my friend Ron says, “It doesn’t have to be fun, to be fun.” 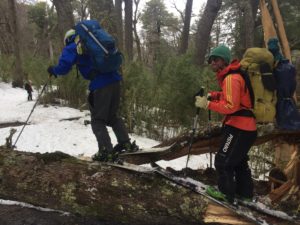 Finally the forest thinned and we starting climbing a west-facing ridge to escape the river at the bottom of the drainage.   A crisp sunny day, the skinning was steep and firm in sections.   These guys just cruised right up the most difficult sections, and for more than a few moments I was barely hanging on by a skin hair or two.   We topped-out into the alpine, overlooked cavernous cliffs and valleys, and got our first great views of the area.

On a broad, low-angle, snow-covered ridge, we made easy progress and arrived shortly at the Otto Meiling Hut.   Located at 1885m and built in 1971 by the Alpine Club of Bariloche, this metal-roofed wooden structure has a kitchen and living area on the ground floor with a sleeping loft above.   A few sturdy picnic tables offer functional comfort and a single window provides modest light.   The loft sports an ample supply of used mattresses and the chimney from the wood-burning stove elegantly threads its way through the sleeping loft.   During high season, with up to 60 people sleeping in the loft, it’s probably pretty grim.   But in winter, it was luxurious and spacious.

Did I mention that Juanjo and Jeremias had worked as hut-masters at Otto Meiling for five summer seasons?   And they knew how to get clean running water from a tiny spring just a few hundred feet uphill of the building?   Oh, and also, they knew where to find a stash of dry firewood hundreds of feet above treeline on a glacier.   So within an hour, this cold and thirsty structure was outfitted with plenty of fresh water, warm mate, and a roaring fire in the wood stove. 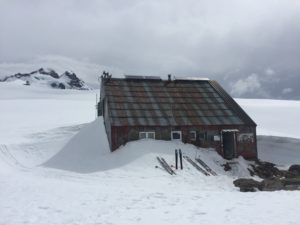 When we arrived, there was actually a party of three Canadians already at the hut. Unable to locate wood for the stove, they were sitting in the cold using their Jetboil to melt water.   While they might have been disappointed by our arrival, they were pretty pleased when we fired up the wood-burning stove and provided them with unlimited liquid water.   In the mountains, fire and water make excellent gifts.

The next morning, we departed the Refugio at 5am with the plan of climbing the Argentine summit via the traditional alpine route.   A calm night with clear skies provided a firmly frozen snow surface.   We advanced off the broad lateral moraine that supports the hut structures and started moving east across the heavily crevassed glacial terrain that surround the summits. After a solid winter with ample snowfall, the crevasses were thankfully well covered and we ascended easily on skis.

After a few hours, we gained a steep east-west ridge called Filo de la Vieja (Old Lady’s Ridge) that allowed us to bypass some of the more hazardous terrain.   Dropping off the ridge towards the northwest, we traveled towards the prominent col between the International summit and the Argentine summit.

At this point, I noticed some hushed conversations among my teammates, and it turns out they were plotting a change of plan.   Diego comes up to me and suggests that – instead of the standard route – he’d like to try climbing the more aggressive south face and then descend the coveted and rarely skied north face of the mountain.

As my friend Tyson jokes when considering questionable objectives: “What could possibly go wrong?” 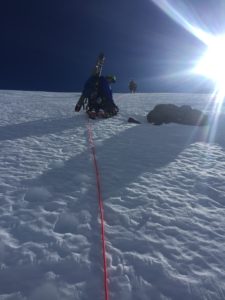 I gazed up at the nearly vertical terrain that was certainly beyond my comfort zone — especially with lightweight aluminum crampons and a single non-technical ice axe.   But these guys said it would be easy.   Diego — winner of the Piolet de ‘Or — would lead the route across a tenuous snow bridge and kick steps through the dense wind-pressed snow to the summit.   The rest of us would follow.

I protested that we’d have to cross a bulging wind-loaded section perched over prominent cliff bands. Even a small avalanche would take us for a nasty ride. They looked up, considered it for a moment, and said that they had called my mother and she said it was going to be OK.

What could possibly go wrong?

Juanjo belayed Diego over the snow bridge without incident, and we all progressed upward.   Moving quickly with skis on packs wearing boot crampons, we topped out on a small snowy saddle just below the Argentine peak, and then had a short exposed scramble on loose light-colored volcanic rock to the actual summit.

We enjoyed fabulous panoramic views of the surrounding terrain and distant volcanos under mostly blue skies with just a few high cirrus clouds.   I was hopeful that the gnarly, sustained, 45-degree descent down the solar north face of the mountain would soften.  In the southern hemisphere, the sun angle is reversed. The south faces are the frozen shady aspects and the north faces are the warmer, sunny sides.

After eating lunch, we carefully cleaned the volcanic grit from the toe pieces of our tech boots, stepped into our skis, and started descending the initially benign north face.   The snow was soft enough to leave tracks but the slope quickly broke over into much steeper terrain above a long transverse crevasse.   Diego confidently led the descent along a narrow sub-ridge, and we regrouped above an initial crux.   Diego carefully dropped through an especially steep section and then descended a broad open face in soft spring snow.   Then he gets some speed and jumps over the crevasse. 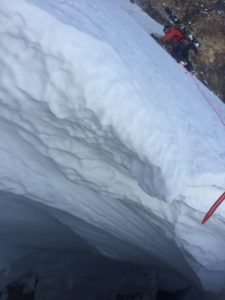 You’ve got to understand.   I’m almost 50.   I’ve got two small kids.   I’m not the kind of guy that likes to ski over an open crevasse.   As I descended the face and gained some speed, I reminded myself that my mother said it was going to be OK. I landed on the downhill side, hip-checked for an instant, and kept skiing.

Keeping an eye on each other and stopping occasionally to re-group, we descended more than 6000 vertical feet on the Alerce Glacier to the Laguna de las Flores (“Lake of the Flowers”) – well below the elevation of the Otto Meiling Hut.

The next morning, we re-traced our steps down the broad slopes below the Refugio, picked our way through the steep bamboo-filled forests, navigated fallen trees and skied through patches of mud. We found the truck, and drove down the rugged double track until we got stopped by the sturdy metal gate.

It was locked, secured by a thick steel chain and a fat padlock. 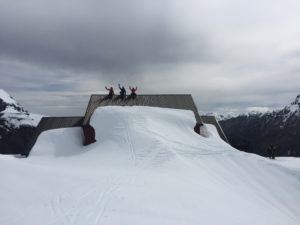 Finally, it was my opportunity to shine.   I wasn’t always the upstanding citizen that I am today.   When I was young, I got pretty damn proficient at picking locks. I asked Juanjo if he had anything thin and metal, like a rigid piece of wire.   We found one of his ex-girlfriend’s earrings under the seat.   After a moment of fiddling, I’d opened the padlock and we were out. 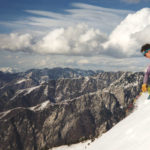 Previous post Adventures and Reflections on Decades in the Wasatch 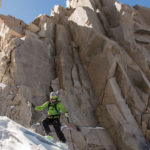 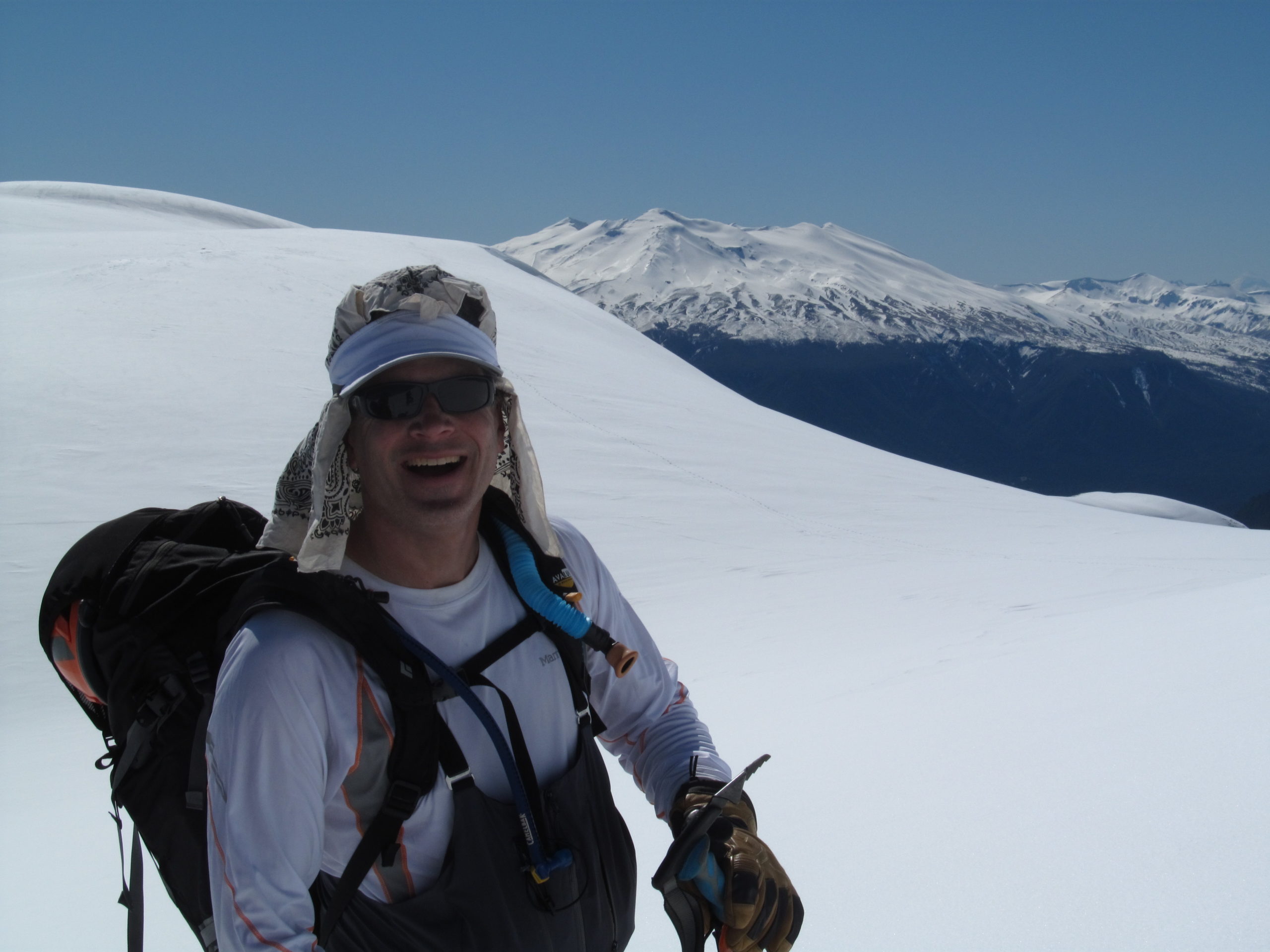 What is a big issue your backcountry community is facing?

Like many endangered species, loss of habitat is our greatest threat. Warming temps mean higher snow lines and less available terrain for the backcountry skiing community.