The Tour Not the Turn- Breaking Trail 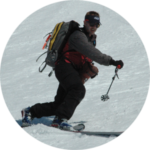 Trailbreaking isn’t the position many volunteer for, but there are benefits that only the guy in front fully enjoys; not the least of which is more freshies. More time gliding the tips of your skis through a landscape of untracked, uncracked, crystals of life. On the skin track it is mesmerizing; when porpoising down it’s downright delectable. 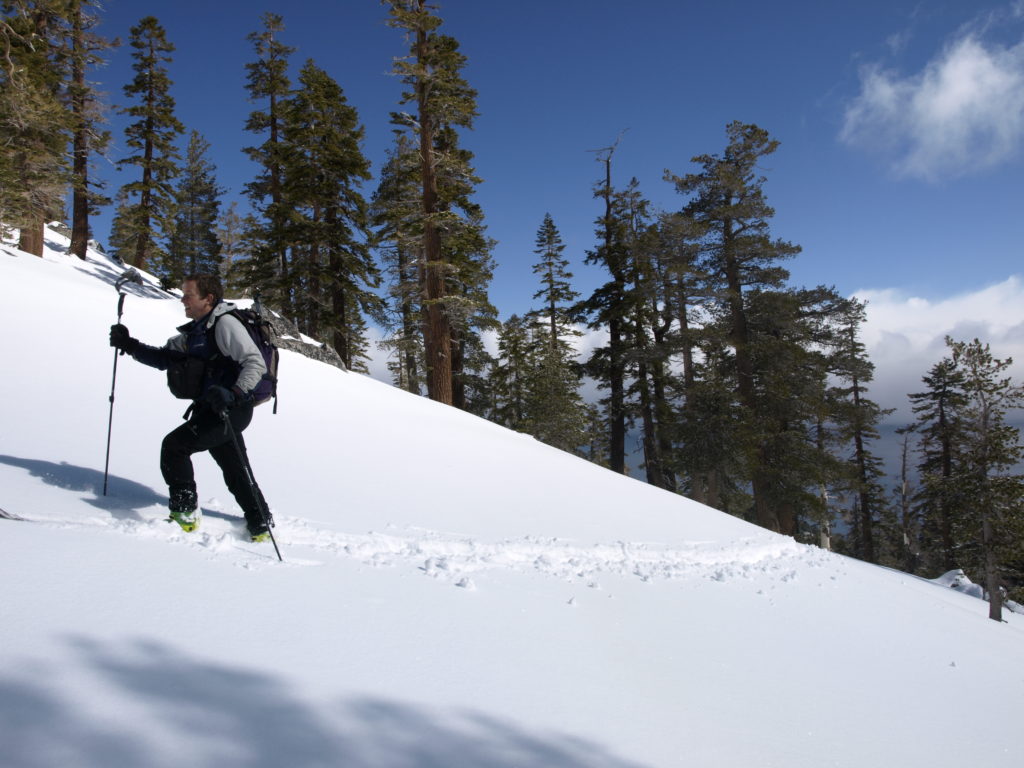 The cost of more time making tracks instead of following them is sweat. Even for trailbreakers there are limits and on some days I’m more than happy to share duties, but not normally. After all, isn’t sweat part of why we earn our turns? The workout, while it isn’t considered fun, is nonetheless valuable and it isn’t that hard to get in a good rhythm to let your mind spin while your sweat pours out in time with your pace. Indeed, this is easier to do on an established track where you can just tootle along and go at whatever pace the space in front of you allows. If you’re on the tails of the trailbreaker, their speed will set your pace. If you adopt the caboose position you can let loose with a free striding sprint and maybe jog up the hill; but you won’t get many freshies on the climb. 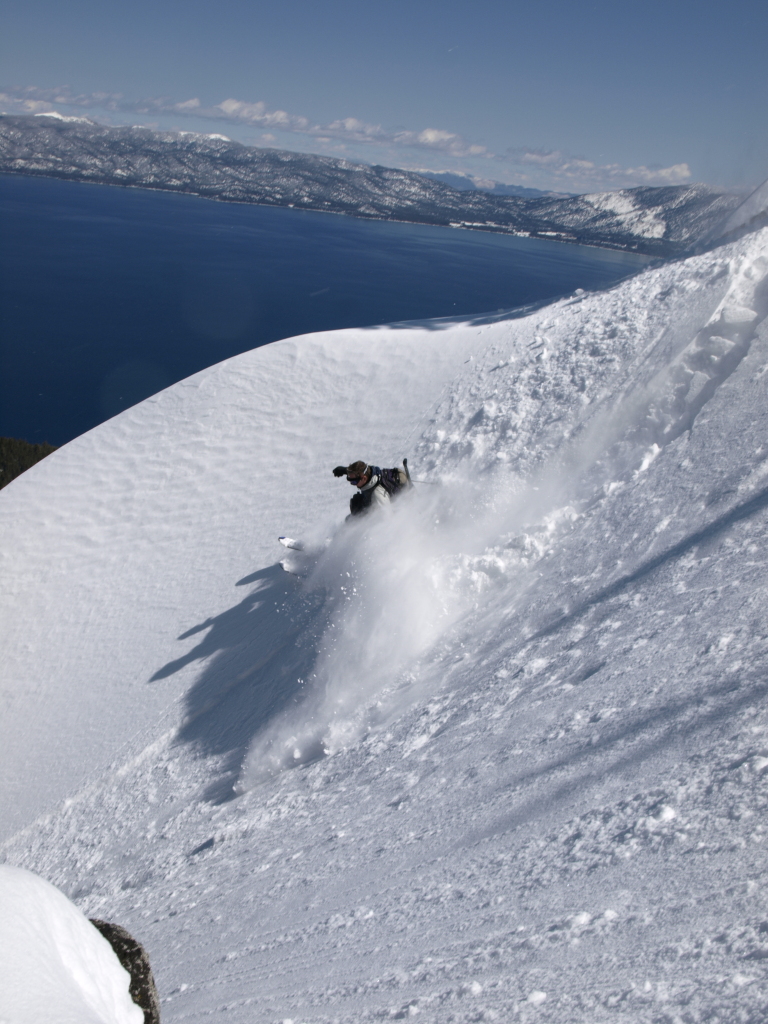 At the front of the line, sweat is a given; either from racing to stay ahead of the pack when the snow is consolidated, or plowing a trench when it’s deep. Even with a 2-pin toe and a rockered tip, the first step at least requires the extra energy of packing the fresh snow down. That and some level of resistance to forward movement as the leading ski pushes through. There is less glide with more of a climbing gait. It definitely wears on you, but at my age, I need all the help I can get to wear down the tire worn around my waist and I’d rather do it breaking through fresh snow than almost anything else.

Another benefit is to be in the position to set the trail, not just where you aim it, but the angle of attack. You know me, I’m all for the low angle track and admit part of my preference for setting it is to persuade others, by experiencing it, of its benefits. My main reason though, is so the next lap is way easier. It has the additional benefit, over time, of providing a track that more people can follow, at speed, without expending excess energy working to get their skins to hold. The main reason though, is I know what my pacing is, and what angle and rhythm is best for me. Being in the front lets me set that trail. It allows me to go longer, which, again, means more freshies.

The same is true for you, dear reader. There is an angle that is best for you. You may find most tracks already set are fine, but I’ll bet your optimal angle is different by a degree or two. Part of that will be the boots you have, and how they flex for walking. Stiffer boots tend to lead to steeper tracks since low angle tracks magnify the limits of their range of motion. With stiff boots, or a climbing peg – even the low one, you would hate the track I set. The converse is true as well. The only way you’ll know is to take the lead yourself. Go ahead, even if you’re touring with a group, it’s okay to set your own trail. Don’t worry about “saving the snow,” it’s already getting tracked up; more snow will come and cover up your tracks and besides, in a group why does only one guy at a time get freshies on the way up? Who made that stupid rule? (The guide said that? Then get back in line.) Need I remind you that conversation is easier walking abreast than single file? 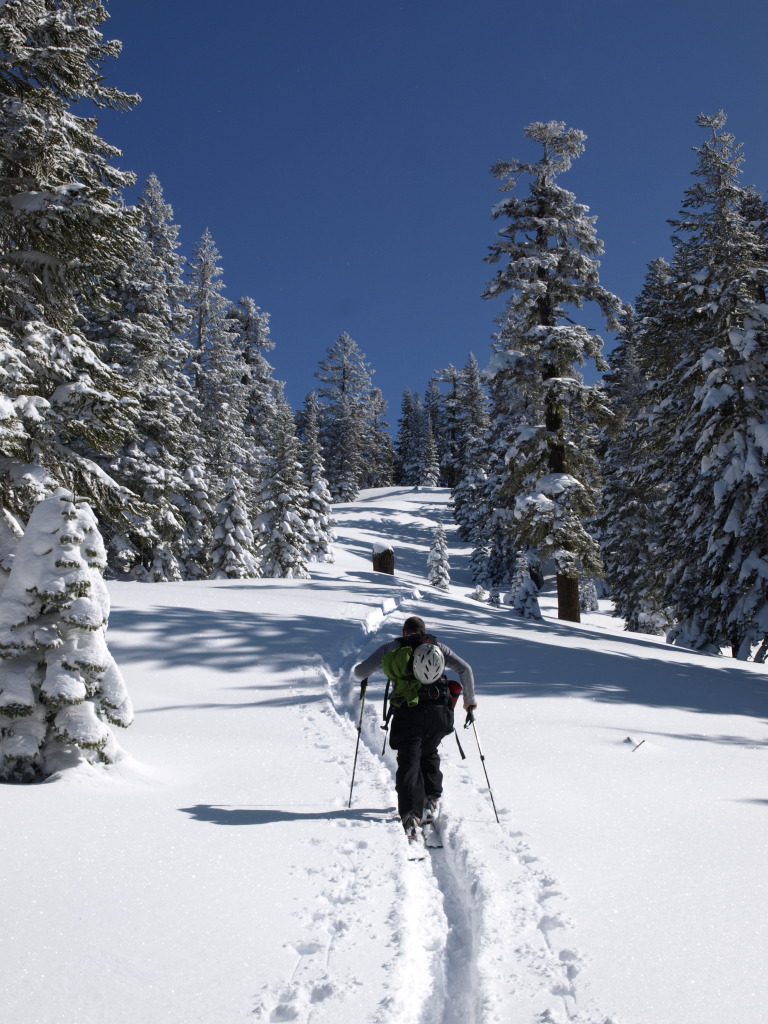 While I like setting a trail to my personal preferences, and love the sweat of the climb, the biggest benefit is feeling my skis floating through fresh, light, smooth snow. It doesn’t have to be light and deep since there is such a thing as too deep for enjoyable trailbreaking, but light and knee deep is deliciously adequate. It doesn’t have to hit you in the face to make you smile, it only has to rub up against your skis, spilling over onto the topsheets and breaking around your boots to feel fantastic. What snow rider doesn’t want more of that?

Craig Dostie migrated from Michigan to California the year before the great El Nino winter of 82/83 and subsequently became a rabid proponent of backcountry skiing. He went on to create Couloir and Telemark Skier magazines and continues to promote human powered skiing as a Senior Editor at Backcountry Magazine and on his website EarnYourTurns.com. 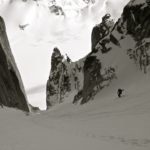 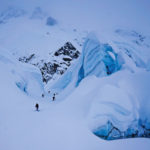 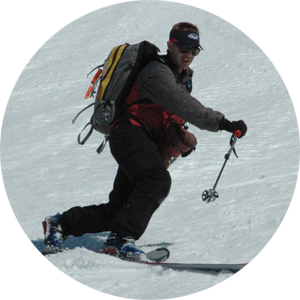