Making the last rappel in the first light of day. Photo of Teague Holmes by Jason Dorais

Shivering in the dark, I’m suddenly falling.  My legs kick and I groggily realize that I just experienced a hypnogogic hallucination.  Fully awake, I look at my watch.  4:00 AM.  It’s time to go.

Huddling for warmth with my brother, Jason, and two friends, we’ve been trying to wait out the darkness before skiing the Grand Teton.  Perched at 13,700 feet in an alcove just below the summit, I can’t wait any longer.

Eighteen hours ago, we loaded up my car and rallied from Salt Lake to Jackson with a plan to ski in the Tetons.  Our window was short as family duties kept us grounded until mid-morning and a storm was set to arrive Tuesday night.  It’s rare that we all have the same day off and all of us wanted to make the most of the opportunity with a lingering high pressure.  Fueled by a liter Diet Mountain Dew and even more ambition, I kept steady pressure on the accelerator while the group debated the possibilities. 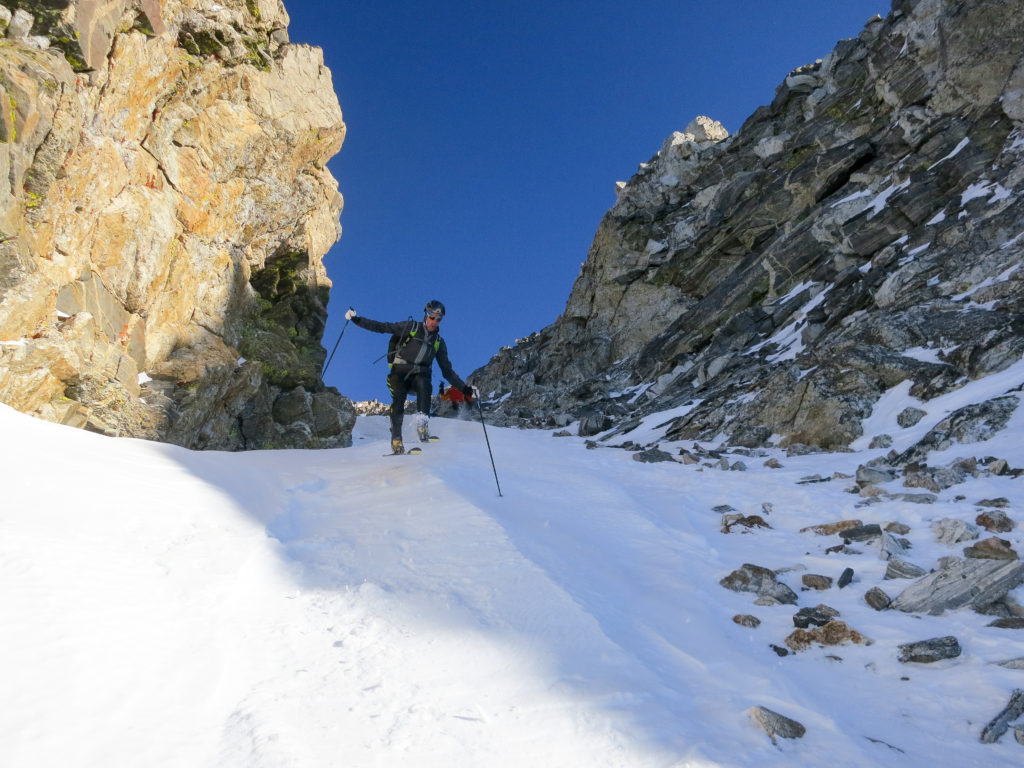 Arriving at the Taggart Lake parking area, gear spewed forth as we packed for our objective.  We had decided on skiing the Grand Teton and satellites, the Middle and South Tetons, a link up that is commonly referred to as the “Trifecta” for obvious reasons.

This time, Jason was back along with Tom Goth and Teague Holmes, two of our regular partners in the Wasatch and capable ski mountaineers.  Our timing was unusual as most times these endeavors are started in the wee hours of the morning to maximize daylight.  Leaving the car at 2:00 PM, we embarked on the exact opposite of an alpine start.  We would be maximizing darkness but decided to embrace it.

Historically, the Trifecta is skied north to south, starting with the Grand Teton.  Sweating in the afternoon sun, I had a revelation.  We would ski it from south to north and end with the Grand.  This would allow us to ski the superb East Face and Glacier route on the Middle instead of the ordinary Southwest Couloir.  After convincing the guys, we worked our way up the South Fork of Garnet Canyon in T-shirts. 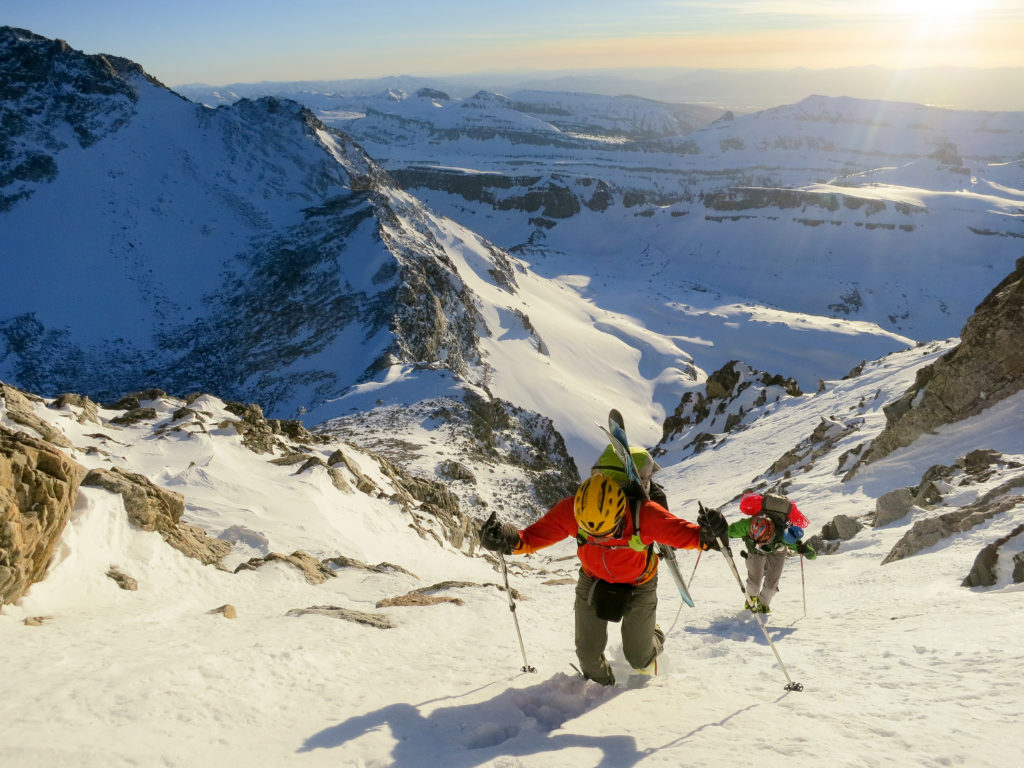 Jason and Teague racing the sun up the SW Couloir of the Middle Teton. Photo by Andy

Inspired by the peaks around us and ready to unleash some pent up energy, I skinned ahead and shot some photos in the sharp light.  Regrouping beneath the South Teton, there were rumblings about the weight in our packs.  We were carrying an unusual amount of equipment in our paper-thin skimo packs.

Our style is typically as light and fast as possible.  We all arrived here through various paths but the common denominator is a desire to ski as much as possible.  With jobs and families, we all need to make the most of these mini vacations.  We use carbon ski mountaineering race boots, sub 1400-gram skis, mohair skins, and every other modern wonder that allows us to travel quickly through the mountains.  Our technique as a group is quite efficient but on this day and night, we would need to slow down.  We hoped to summit the Grand at dawn and ski the East Face into the Ford Couloir in the morning alpenglow.

In spite of the heavy packs, we suddenly found ourselves on the summit of the South Teton, seemingly transported there with almost no effort expended.  The air was calm and warm in the low afternoon sun.  Motivated to get up the Middle before dark, we ripped skins and gang skied the firm NW chute back to the saddle.

Jason Dorais admiring the view when he should have been preparing to ski the Glacier Route in the last seconds of daylight. Photo by Andy

The traverse over to the Middle was smooth and fast and soon we were booting up the Southwest Couloir, pace lining to make the summit before dark.  This couloir was the first I skied in the Tetons and it’s amazing how those bumbling days brought so much excitement (for the record, I’m still bumbling around and still super excited!).

On the summit with just enough time to shoot photos and ogle the Grand, we did just that instead of figuring how the hell to get off the summit and out onto the East Face. Route finding became a little onerous, even though I’d skied it once before.  That day, the coverage was much better and we were able to ski from very near the summit.  Oh, and the sun was up too.

From the rocky summit block, we rigged a rappel that got us to the highest skiable point on the face.  Since I was the only one who had skied the face before, I led out, albeit on belay.  Fortunately, as I skied off into the black abyss, I suddenly had a very distinct recollection of the route and navigated through the correct rock band.  Teague joined me and led the way down to the chute like terrain below the main face.  We regrouped, relaxed, and laughed our way down to the Moraine.

Jason skiing the Teepee at dawn. Photo by Andy

Looking up as the guys skied down to me, the stars were brilliant and dense with light from their headlamps dancing on the steep rock walls much in the way light shimmers on a body of water and reflects onto surrounding features.  I was euphoric.

It was now 10:00 PM and everything had gone perfectly.  We still wanted to ski the Grand but were staring at eight hours of darkness.  In a huge departure from our usual style, was dug a pit on the Moraine to rest, melt snow, and brew up some soup.

While laying on ropes and packs, Tom dutifully tended the stove and melted liters of snow and cooked ramen and freeze dried meals for us.  We’ve been tormenting him, saying that he only wears black and ruins our photos and that he never carries a camera to contribute.  He said that by being the cook we are now even, sipping the salty hot beef broth, I completely agreed with him.

Near sleep, I couldn’t keep from shivering, even while spooning my brother.  I stood up and looked at my watch.  It was 1:00 AM and I declared it was time to get moving.

Psyched to be on the Grand again, we made good time up the rock solid Teepee Glacier, following a frozen boot track from warmer times.  With a group of four, the ice bulges in the Chevy took a little longer than normal, but Jason led the way and we followed, each with one tool and inadequate crampons.  In the Ford, I started to feel a little dizzy as I followed the orb of light in front of me.  We reached the alcove just below the summit around 4:00 AM and I immediately lied down and ate a nasty gel.

Mercifully, it was calm and relatively warm.  Without much discussion, the four of us huddled together, hoping to burn off the interminable night.  For a moment, cradled in down and spooning my friends, I was comfortable.

Suddenly, I was anything but comfortable and felt like I was falling.  Feeling my legs kick out, I recognize the sensation.  I was drifting to sleep and experienced a hypnagogic hallucination.  I used to sense the same thing when falling asleep in class in high school.  Just under the summit of the Grand Teton, predawn and cold, this wasn’t anything like a boring high school classroom.

Shivering, I declared for the second time that it was time to get going.  We were going to ski a bulletproof GFT in the dark.  Cold, and fighting their own discomfort, the guys obliged and we tagged the summit where we were blasted by a dramatic westerly wind. 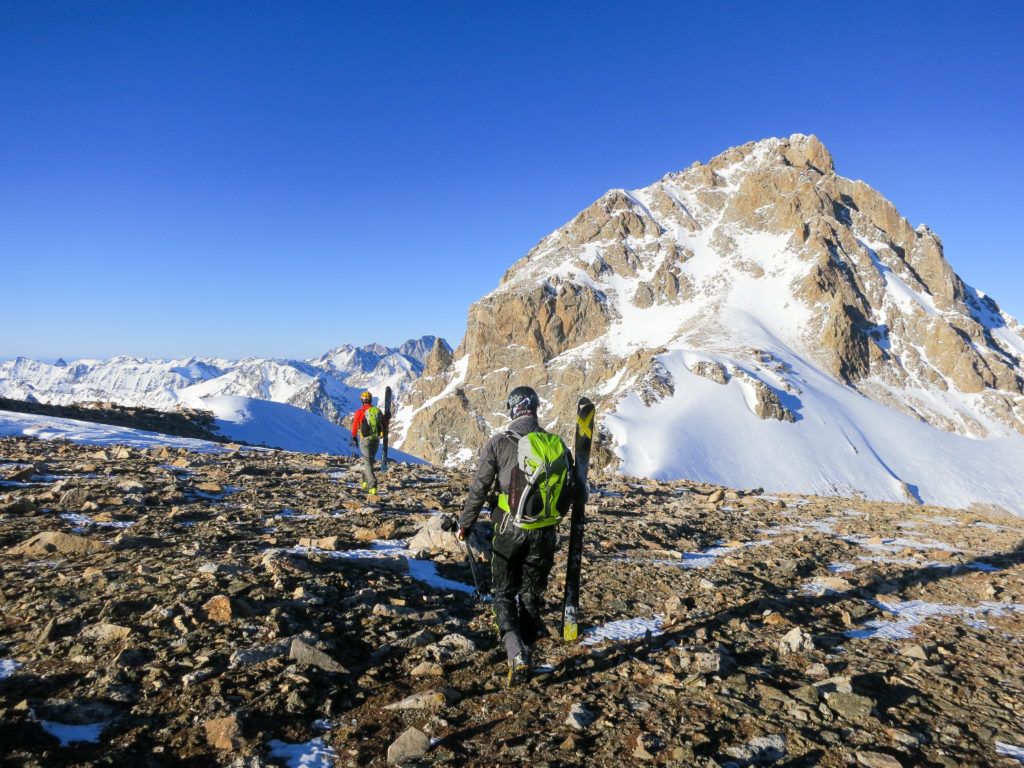 Jason and Tom en route to the Middle Teton. Photo by Andy

Race transitions behind us, we readied ourselves for the harrowing descent down the steep dark ice.  Jason set off from the summit block and made a turn through the rocks.  He joked that that one turn was going to be his only one.  Back at the alcove, I led out down the East Face toward the Ford Couloir.  It was firm by my edges were sharp and I felt secure.  The feeling of skiing the Grand by the light of the stars and moon was sublime.

That feeling evaporated when we entered the Ford as it was steeper, icier, and the illusion was security was gone.  Timidly now, we made our way down a steep rollover before calling it quits.  To ski the Grand requires some aid and this morning, we chose to aid a little more of it.  We downclimbed a couple hundred feet to the standard rappel at the top of the ice bulges in the Chevy.  A couple raps later, the mountains were on fire and the long night was over.

Jason, rapping off the rocky summit block of the Middle to the top of the East Face. Photo by Andy

To our amusement, we found a strip of soft snow sheltered by the Teepee Pillar itself but that didn’t last long.  More bulletproof snow was the name of the game, but in this less intimidating setting, it was actually quite fun.  Wanting just a little more, we continued down the Dike Couloir and made the sweeping traverse past Delta Lake, around to Bradley Lake, and back to the car.

Up next came an unhealthy amount of food, followed by the hardest part of the whole endeavor.  With the redeye drive home in the rear view, all that remains are fond memories of a day I’ve dreamed about since I was stuck in the hospital delivering babies while my phone kept buzzing with those damn pictures. 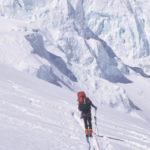 This winter has been one of exploration. The Wasatch has been blessed with low elevation snow allowing for quick approaches and exits from a wider swath of fresh terrain.