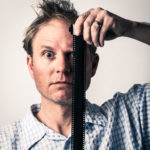 When skiers think of New Mexico the last thing on their mind is usually deep powder backcountry skiing. In fact many folks I talk to seem to think of New Mexico skiing as more of a novelty than something to be sought out. But don’t be fooled as the southern terminus of the Rocky Mountains ends not with a period but a dramatic exclamation point! A five-hour drive south from Denver and an hour and a half north from Santa Fe has skiers in the historic town of Taos. For anyone living outside the US pulling into town feels like arriving in another country. Everything is different. From the adobe houses, to the thriving art scene and amazing food, the culture of Taos is unique to this corner of the Southwest. 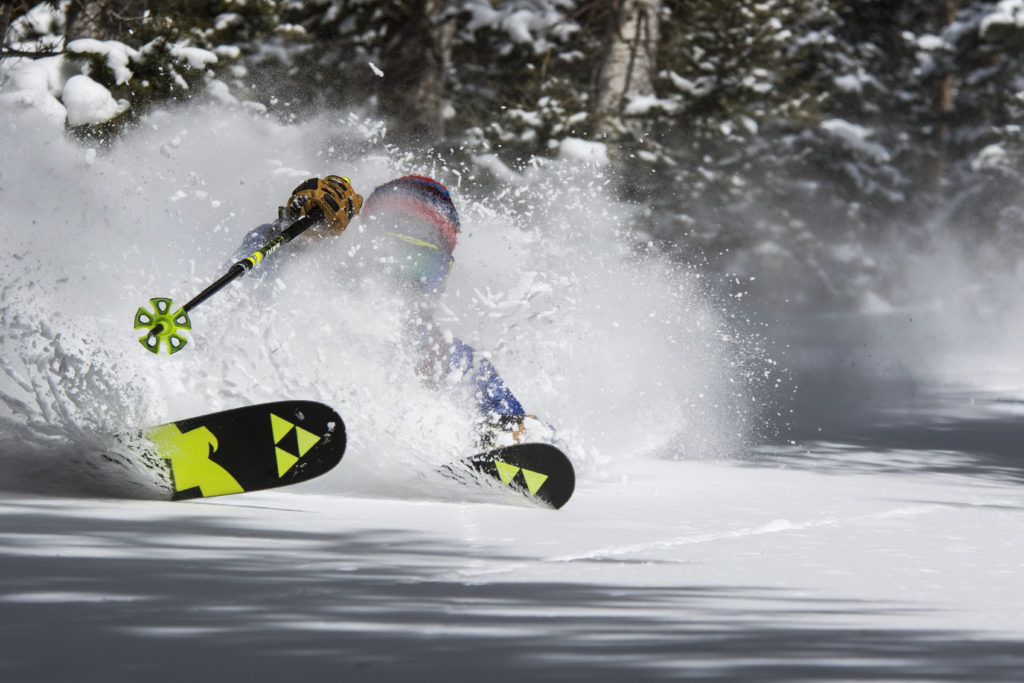 One of the first things you notice about the area is immense relief of the Sangre De Cristo range rising out of the stark high desert. Town sits at about 6,900 ft while Wheeler Peak soars to 13,161 ft just a few miles from town. As you work your way up the road through tiny Arroyo Seco and up in to the canyon the snowpack deepens with every mile. By March the base can hit 100 inches and the skiing is sublime. My first trips to Taos had me skiing at the area with deep base reports and double-digit 24-hour snow depths. Those were great days with empty chairlifts and endless cold smoke. I recently (ahem) even took my 40th birthday party there. A beautiful adobe in Arroyo Seco that slept 14 complete with an outdoor hot tub, with a view of the Sangres ran a $1300 for four nights…or about 1/8 of what you would pay in any of the big ski towns. 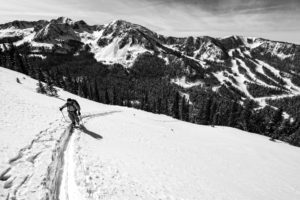 In all my time skiing the Land of Enchantment I had never once ventured outside the gate even though I was skiing the backcountry regularly in other parts of the country. Why? Whenever I asked about the venturing out I was met with tales of angry tribal elders prosecuting trespassing skiers. More than once people would say,” head out that way and you’ll be met by the sheriff guaranteed.” And this was not entirely a case of powder protectionism but was rooted in the spiritual nature of life in the southern Sangres. 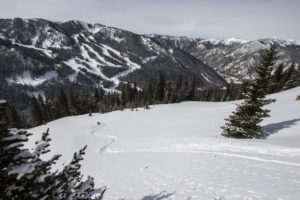 Nearly 6,200 feet below the peaks of the Wheeler wilderness lies what is know as the Taos Pueblo. The pueblo is a community where Taos natives have lived continuously for approximately 1000 years. One of the most important spiritual sites is Blue Lake, situated in the area surrounding the Wheeler Peak wilderness. It is this spiritual sensitivity of the area that keeps skier numbers in check. Wandering around willy-nilly is not an option here and if you are found on tribal lands you could find yourself in some hot water. Keep in mind the Taos Pueblo and the surrounding lands are a Sovereign Nation and the tribal elder charged with protecting lands outside the Pueblo is known as the War Chief!

Now that all this discouraging info has been disseminated its time to get to the good stuff, i.e. the ski touring that you CAN do. 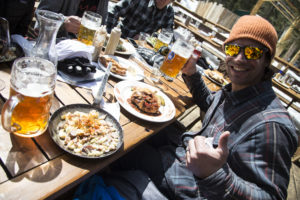 There are numerous good places to stay in town, in Seco, or up in the Taos Ski Valley proper but my favorite place to stay by far is the Bavarian Lodge. The Bavarian is not only a true European style lodge with matching menu and giant beers to boot, but its proximity to backcountry trailheads of the Wheeler Wilderness makes this a great place to stage from. There are a few access points to check out but if you want to get right to the goods without having to sort it all out on your own I suggest finding a local guide. My first time into the Taos backcountry we got ourselves wound up like a kid on Christmas Eve. There were so many great looking lines and we stood on our skis scoping big bowls chutes and coolies that beckoned like snowy sirens. Then reality set in. We knew nothing about current avalanche conditions or what lines usually held or if that sweet chute we eyed was named “Idiots” or “Dead Swede” or “the Reef” or whatever. Like much of the Southern Rockies the snowpack around Taos can be thin with basal facets being a persistent problem. Storms race across the open desert slamming into the Sangres dumping copious amounts of light density snow that makes for great skiing, but tricky hazard evaluation. We ended up keeping it safe, staying low and still finding some great snow and fun pitches to ski and shoot. We stayed out of those big lines but my Spidey senses had been triggerered, and I knew I would have to come back. 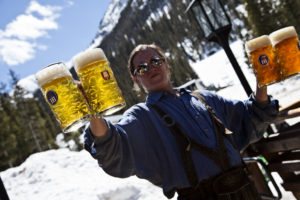 After thousands of feet of skinning and skiing the Sangres finest you are going to be ravenous. And this is a very good thing. The only thing that can compare to a face full of enchanted powder is the food. The food around Taos and the southwest in general is nothing short of a culinary orgiastic experience.   If the menu has anything with their famous green chilies be sure to order it. That goes double for the green chili cheeseburger. When you order enchiladas, order like a New Mexican and get you sauce “Christmas “ style. And whatever you do never tell the cook or waiter or friend how good the Mexican food was. This will bring a blank stare from people as they look at you like you have two heads and reprimand you with, “its not Mexican food its NEW MEXICAN food!” What’s the difference? I am not totally sure but it has something to do with cumin. 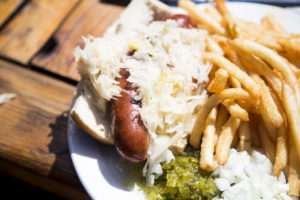 Fast forward to February 2016 and I find myself right back in the valley with skier Sven Brunso. With Taos in the bull’s eye of a very promising storm system, Sven and I left our respective hometowns of Durango and Breckenridge, and drove through the night into the fury of the approaching storm. We met just in time to nail first chair at Taos after 22” of low-density blower snow covered a significant base. After two solid days hammering the lift served and hikable terrain at Taos we were ready to escape the lineup and find some solitude in the Sangres. We drove a couple miles from Taos Ski Valley to the parking lot of the Bavarian and began our ascent following the narrowing valley floor into the basin. As we started skinning I quickly realized that the snowpack was far deeper than my previous excursion into this area. The lower slopes were holding deep stable snow that was well protected by the massive well spaced old growth pines. We were about 15 minutes behind a group of locals that were putting down an aggressively pitched skin track to the heavens. While the skin track was hard on the legs, each switchback consumed ample vertical and guided us through the forest before we finally exited into an upper basin with a handful of gnarled trees that gave testament to the intensity of this high alpine environment. The trail breaking group had opted to traverse the face into an area we later found out was one of the many chutes known as the “Fingers” which include lines known as; Bong Chute, Peace Chute, Middle Finger, Ring Finger and Pinky. 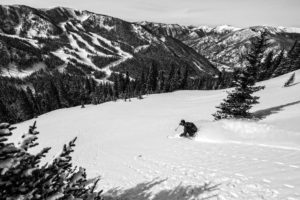 After leaving the relative safety of the trees, we gathered our thoughts and planned our route to determine where we should dig our pit to get a representative sample of the line we wanted to ski. We noticed that the zone we originally were hoping to ski was showing signs of significant wind loading, so we selected a more conservative line from the top that would keep us safe while delivering us to the top of steep trees we had skinned through on the ascent. We gained the ridge and pulled skins from skis and took some time to savor the amazing birds eye view of Taos. 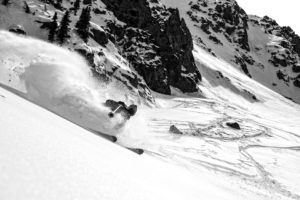 Taos Backcountry with Carlo and Ben

We had enjoyed some epic skiing at Taos, but the fact that we were about to enjoy 2,500 of turns earned felt special. I was surprised to find out that Sven, a veteran of backcountry skiing throughout the southwest, was also skiing this zone for the first time. Sven was obviously eager to get started as he pulled his shovel from his pack and was quickly chest deep evaluating a snow pit. With a wicked smile, Sven declared the snowpack ripe for pillaging. As he clicked into his binding he mentioned that, “I have skied Taos many times, but I never had any idea that backcountry this spectacular was staring at me from across the valley.” As we drop in, we are greeted by ultra stable boot to knee-deep powder above tree line and then duck in and out of the shadows of the pines through thigh deep snow protected from the intense southern sun. A few thousand vert of premium skiing has us right back to the valley floor. We hit the road and skied to the front deck of the Bavarian. Minutes later we are greeted by two giant steins of beer and a massive pretzel. We look across the valley at our tracks and talk about what we should ski the next day. Another skier asks us how the powder was. With a blank stare on my face I say, “it’s not powder, its NEW MEXICAN powder! “What’s the difference?” “I’m not sure but it sure feels enchanted.” 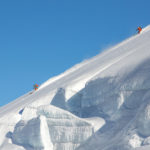 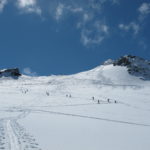 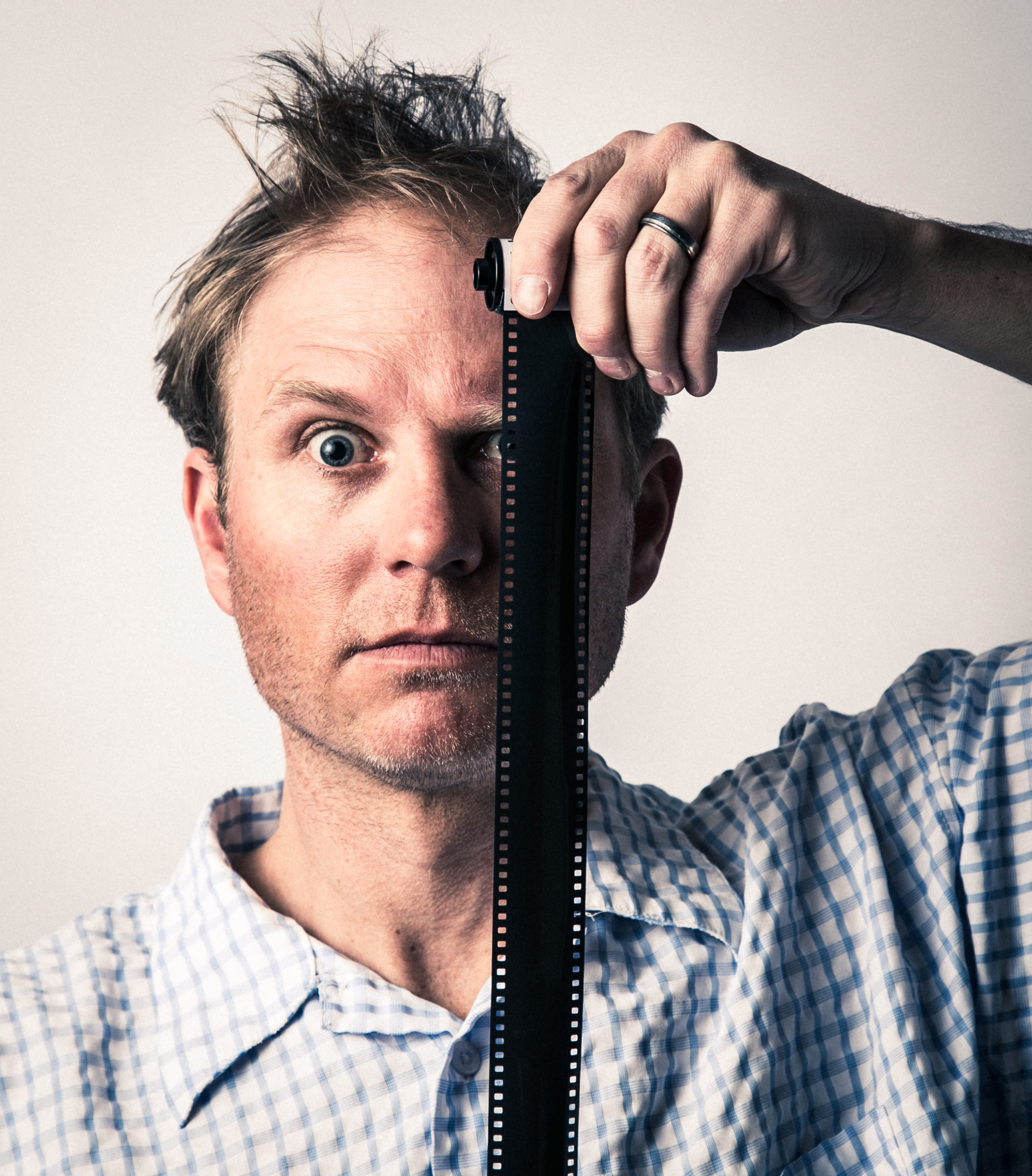 With the big snows this winter, what's on tap this spring for you?

I think I may try to get out to the Eastern Sierras. It's been years since I've been to the area but I think it should be a great spring out there!