I am hardly the first person to wonder about the value of social media.  Lately the drumbeat against it has gotten louder with the ongoing revelations about Facebook’s shenanigans, and of course the ‘gram is owned by Facebook, and I keep seeing comments – ironically, on Facebook – from people who are “thinking” about deleting their accounts (how would we know?).  Even famous people who have zillions of followers and probably rely on social media to further their careers have dumped social media cold turkey, and invariably – just like those who don’t own TV’s – are quite smug about their liberation from social media.  But we humble and quirky backcountry riders….well, we seem to continue to use it, posting pics of ourselves and our friends slaying sick pow on sweet lines.  So the question becomes…is social media good or bad for the backcountry community?

The success of the numerous social media platforms is likely due to more than one function it serves for its users.  For some, it’s simply a nice way to keep in touch with actual friends both near and far (if I’m not mistaken pictures tell a thousand or two words).  For others, these platforms provide a more direct link to interesting issues/articles/perspectives from people whom we have pre-selected as worthy conduits of information.  For others, it is a vital tool for activism, both disseminating and collecting information, to and from the world at large.  But even as we like it, social media – like our friends themselves – can be annoying.  So what’s the difference between liking a post and being annoyed by a post?  And do we care about being annoyed or being annoying? And most importantly, does using social media enhance or detract from our skiing?

Some time ago I heard a “This American Life” that did a bit of a deep dive on social media and they specifically talked about the effect on kids.  I remember they related tales about teenage girls posting glam pics of themselves looking cute and then anxiously awaiting their friends’ responses of “you’re so pretty!” to each other, to the point where they were keeping track of which friends were saying “you’re so pretty” and how often.  Clearly, that’s a function of the insecure and still-developing teenage mind, but really, how far removed from that mindset are we supposedly mature and confident adults?  When we post pics of ourselves and/or our pards slaying great powder, are we reveling in the joy associated with that unique, sublime experience and assume that our friends will share our thrill, or are we gloating a bit because “we got it, baby, and you don’t!” And in slightly perverse way we subconsciously want our friends to be envious of us?  And if we don’t get any “likes” of the Ascent mag-quality pic of us blowing white smoke under bluebird skies and therefore don’t receive the well-researched shot of addictive dopamine that our brains get from the stroke of “likes”, are we miffed?  Hey, that was some pretty awesome shit I was doin’ there!  You all should like it!

So where’s that line between simply being stoked, gloating about how awesome you are and creating envy, and posting because you need the stroke and validation that you are indeed so pretty?   I think the answer lies in the perspective of the sender and the recipient.  Just yesterday we had a nice early-season powder day and I snapped a coupla quick shots of my Vermont buddy thigh deep in blower and posted them last night, tagging him so that all his “friends” could see what he was doing.  We have a few mutual friends but he has many more whom I don’t know, and he’s the same with my friends.  I’d like to think that I’ve been doing these silly outdoor activities long enough that I don’t need validation or reaffirmation of my opportunities or abilities and that my posts are both made and received as “I’m so stoked!.” But given that some of my “friends” are from high school or people I don’t see too much who have completely different lives than I do and may not know my perspective, they may get the impression that I’m simply gloating because today I was lucky enough to ski powder and “While you’re havin’ the time of your life I am stuck in the office during the precious few winter daylight hours, asshole.”

Of course, I can’t control other people’s receptivity, but I can control the messaging.  Too much of a good thing is still too much, so I try to avoid posting potentially envy-producing shots too often so that people don’t grow weary of my…gloating?   A very accomplished but very humble friend pointed out that whether you admit it or not, there’s at least a little bit of gloat in every post.  I’d also like to think that emphasizing the other people in the pictures, that the perspective that I was lucky enough to be able to capture that day, in that place, in those conditions, but specifically with these good friends might actually come across in my posts. Am I proudthat I was able to nail it?  Maybe.  Am I happy?  Absolutely! And by keeping that in mind I hope that the posts will convey more of the stoke than the gloat, and my “friends” will appreciate it without much envy-generation.   And if I don’t get any stroke via little happy faces and likes? I just try to let go of any expectations and just revel in those blower-pow moments that I had and hope that my friends share my stoke on it.

Social media’s actual social value will continue to be debated and there is no doubt that the posts you put up about your ski day will annoy someone.  But if you keep up your stoke, avoid the gloat, and don’t expect the stroke, social backcountry skiing can be a happy medium.  Just don’t forget that (literally) at the end of the day as you drag your ass up the skin track for one more run as the sun is setting, rip your skins, take a deep breath, and push off into the untracked, it’s really only for you to “like.” 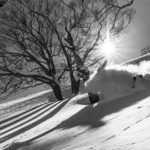 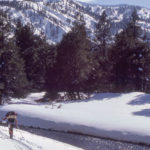