I am not elegant. I usually associate the term “elegant” with style, grace, tastefulness, luxury, refinement, and beauty. I, on the other hand, am usually associated with dated/torn/stained clothes that clash garishly, a preference for taco trucks over exquisite cuisine, food on my face, and gear that is barely held together by poorly-applied epoxy, duct tape, or bailing wire. That’s not to say I don’t strive for some semblance of elegance at times; I periodically clean the interior of my Subaru, I’ve been known to wear a dancing bears tie at funerals and weddings, and I shower and shave every few days, whether I need to not. And most importantly….I ski.

Anyone who has skied in the backcountry in nice powder has (hopefully) gotten to the bottom of a run and looked back up and stared in awe at the graceful S’s that arc back and forth across the slope. We have taken a pristine natural canvas and brushed our own strokes across it, and until your pards push off and sully them, those tracks are art of the highest order that Michelangelo or Van Gogh could only dream of. It is one of the great appeals of skiing, shown by the enthusiasm of backcountry skiers who skin up in the dark and resorters who hover near to-be-opened gates in order to be the first to apply their brush strokes. And I think that’s one of the biggest reasons I love skiing: for those moments that I’m arcing down a slope, I’m shrugging off my general state of boorishness and am actually executing….yes…..elegance (as long as I don’t catch a tip and tomahawk/yard sale, which is most definitely not elegant). 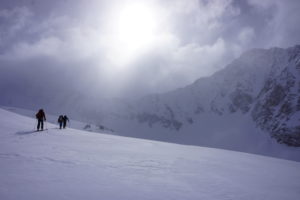 But is elegance only relegated to that sublime sensation of skiing down and the resultant S’s? Or are there other ways that we can take the quest for elegance into other aspects of touring? Some time ago as I was gazing proudly at the line I had just created on a 30-degree slope in boot top powder I had the realization that it was sort of ridiculously easy, and literally almost anyone who skied could do that.   Now, Michelangelo and Van Gogh did not get famous because they were doing something that just any artist could do; their art was bold, distinctive, creative, and different from that of their peers. As I pondered this while putting on my skins, I realized that indeed, most anyone can put in sexy, elegant S’s down a slope, but putting an elegant skin track…..that takes more. More experience, more patience, more sensitivity, more style. At a pitch that’s sustainable, there is a lot of challenge to working your way upwards while trying to weave through thick woods, saving skiable terrain (don’t want to muck up your canvas), keeping the switchbacks to a minimum, keeping the grade to one that won’t have folks coming behind you slip on it and screw it up, avoiding brush bashes, rounding the turns at spied flat spots, and keeping it safe from avalanche exposure. The medium is challenging: there’s no speed and it’s pretty ploddy, the canvas is more variable, and the nature of skin tracks is that they are more angular and not as sexy as down tracks.

But elegant skinning can be done! Working with the terrain and creating a snaky, enjoyable skinner – versus simply forcing your way upward – can feel eminently more fulfilling than a nice down track, because it’s more challenging, and as such – like surfers in search of the ultimate wave – an elegant skin track is so much more elusive. 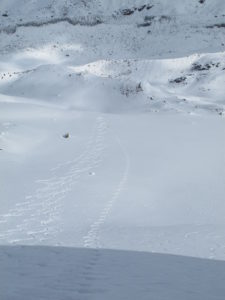 And elegance doesn’t necessarily stop when you rip skins. My wife prides herself on coming up with “elegant tours” that take a bit of creativity, cover a fair bit of ground, ski an array of lines. A lot of folks like to march to a shot, put the skin track in, and farm the shit out of it; if it’s good, why go anywhere else? But using the terrain on a macro scale to enable elegant travel through the mountains can be as fun and fulfilling as a putting in the perfect skin track. Leave from one trailhead, shuffle up a drainage and climb a ridge, ski a line that drops you at the bottom of another (of course, elegant) skin line, sidle up another sub-ridge, drop a chute into another drainage that puts you in good stead to climb to an aesthetic peak that provides access to yet another ski line, and so on. Maybe even ski a south facing line that the sun has had its way with, but gets you to another drainage that typically doesn’t get a lot of play because it’s not on the trade route. And even if a peak has its snow blown off the ridge and requires booting, summit it for the spectabulous views!

If the terrain allows, true elegance will loop you back to your starting point, but hitching back to your car is a small price to pay for an exquisite day of stylishly sliding through the mountains. 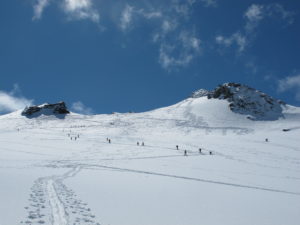 At the end of a day of skiing it’s all too easy to slip back into my uncouth ways, stuffing my face with a cheap burrito with cheese and salsa flying onto my cheeks and clothes as I talk with my mouth full. But I am able to find some solace that for all-too-brief periods of times, in the mountains, on skis, I am almost….elegant. 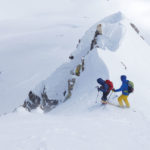 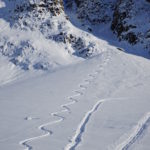