Blitzkrieg in the Tetons 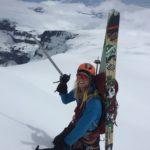 Backcountry skiers are no strangers to operating on weird time schedules, often sacrificing sleep and/or late-night shenanigans in exchange for safe passage into remote mountains in the best possible conditions. In a perfect world the backcountry skier would live in harmony with the mountains, free to seek out the best snow on the steepest lines in the most stable snowpack. Unfortunately, as the most recent presidential election illustrated, this is not a perfect world, and backcountry skiers must balance their search for pristine descents with the constraints of societal obligations (work, school, etc.). These constraints don’t mean that the perpetual quest must concede to the pressures of our society, just that embarking on this quest requires a bit more sacrifice than would otherwise be necessary.

At 6PM two friends, Greg Hewitt and Ben White, and I loaded our ski and ice climbing gear into the back of Greg’s Outback and set off for the Taggart Lake trailhead in Grand Teton National Park. I had gotten out of class just in time to meet Greg and Ben as they left work and, with our day packs ready to go, we were able to leave immediately. We knew that every second counted during our 36 hour window to travel from Salt Lake City to the Tetons and back. 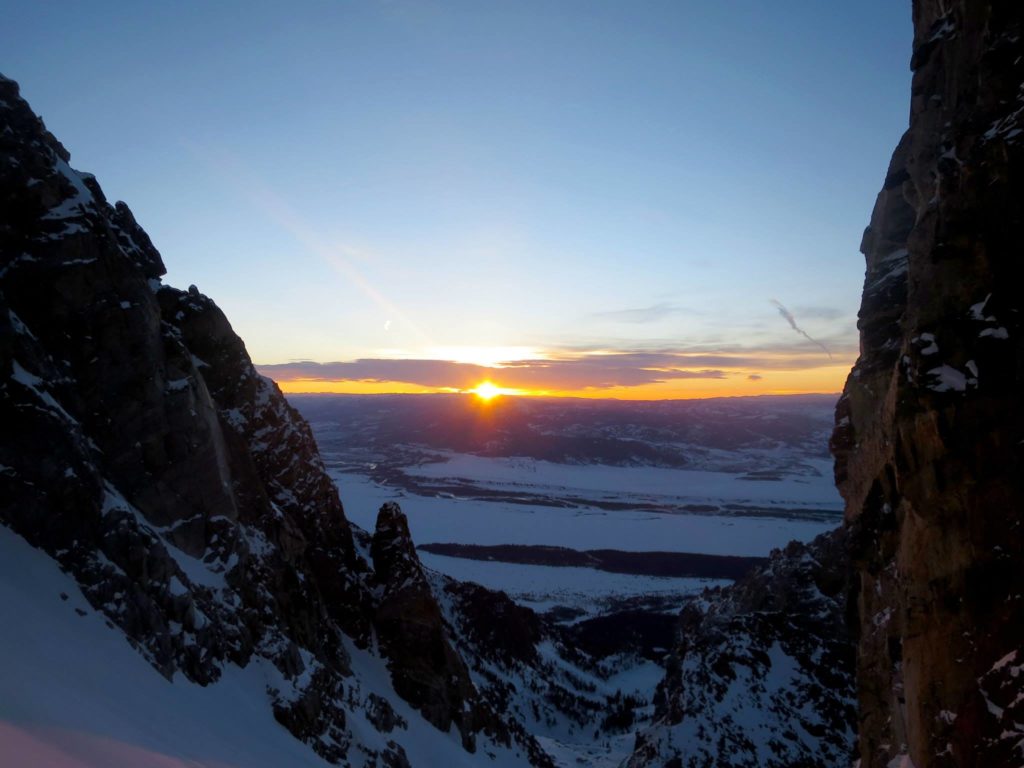 Greg drove most of the way, which meant that we made great time (read: Greg drives fast). That is until we were pulled over somewhere in rural Idaho. At least the officer gave Greg a choice between a ticket for speeding or a ticket for running a stop sign. What a swell guy! Fifteen minutes later we were cruising again, maybe just a couple ticks slower this time. And by 11:30PM we were in the parking lot at our trailhead.

Our objective for the trip was to climb and ski the Ford-Stettner on the Grand Teton. I know there are plenty of spandex-clad ultra runners skiing on carbon fiber toothpicks that can climb and ski the Grand and be back in time for brunch. We did not fall into that category. In fact, taking on this objective in a single day felt pretty ambitious. Not wanting to waste a second, we geared up and were skinning away from the car at midnight on the dot. 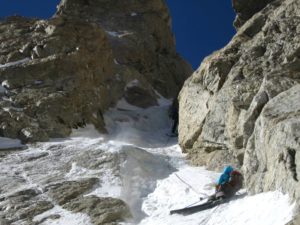 The skin from the trailhead up to the Meadows camping area felt comfortable, smooth, and relatively quick. The approach to Bradley Lake at the base of Garnet Canyon (which accesses the south side of the Grand Teton) can be a bit nebulous. Luckily we had all been up Garnet in the winter several times before, so we had gotten the “wandering over old, forested moraines hoping that we are heading in the right general direction” out of the way on previous trips. Two and a half hours after leaving the trailhead we were skinning past a small handful of tents scattered below the Middle Teton, where Garnet splits into a North and South Fork. Not wanting to wake anyone up, or alert them to the fact that we were sneaking ahead of them, we turned off our headlamps and tip-toed through (whatever tip-toeing with skins on looks like).

Above the Meadows, the terrain gets steeper and the snow conditions fell somewhere on the spectrum between firm and boilerplate. When I slipped and self-arrested after a short slide, we made the reluctant switch over to crampons. We were joined by a party that had left the Meadows camp shortly after we had passed through, though their objective was the full Stettner Couloir. Behind them we saw another cluster of headlamps. As we neared the top of the Teepee Glacier, we could count a full four parties in addition to our own. Luckily all but one of the parties below us either had or switched to another objective. Still, Garnet Canyon was busy at 4:30AM! 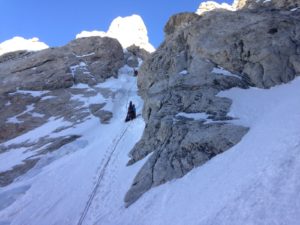 By the time we reached the Teepee Col at sunrise the Stettner party had cruised ahead of us and we were climbing with another party that had left from the Meadows camp. Ben was making them feel awkward by persistently asking if anyone in the party wanted a kiss. (He carries Hershey’s Kisses in his pocket, he just won’t tell you that until you feel sufficiently embarrassed). We ended up climbing at the same pace as them the rest of the way.

The lower section of the Stettner Couloir was in good enough condition that we were able to solo up to where the Chevy Couloir branches left. A couple of ice bulges in the Chevy prompted us to rope up for the two pitches to the base of the Ford Couloir. At that point the sun was pretty high in the sky, but the snow showed no signs of warming in any dangerous way. We decided to continue climbing and monitor snow conditions as we went.

One of the other downsides to that whole “societal obligations” thing I mentioned is that, when you do get the chance to go on a big adventure, you’re not quite as fit as you would want to be. Enter me, booting up the last 1500’ to the top of the Grand. At first I was able to count 50 steps before stopping to huff and puff. Then 25, then 20, eventually down to a cycle of 10 steps, 10 breaths, repeat. Oh well. At least the snow never heated up too much, and by 2PM I was standing with Greg and Ben on the summit feeling exuberant, if also mildly intoxicated (from elevation/exertion, not beer). 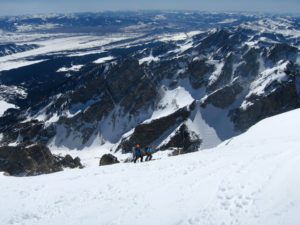 We took our standard summit pictures, clicked into our skis, and worked our way back into the Ford Couloir. The snow was about as good as it could be and we skied 1500’ of 45 to 50 degree corn back to the top of the Chevy Couloir, where we had left our ropes and would start to rappel. While Ben set up the rappel, I dug my Whippet blade into the snow and laid down on the 45 degree slope. Having pulled an all-nighter combined with what was, at the time, the biggest single-day objective I had ever climbed was taking its toll.

My head bounced off the snow and I looked wildly around, experiencing a few milliseconds of panic before remembering where I was. I realized that I had nodded off while still lying with my Whippet planted in the snow at the bottom of the Ford. To this day that is the most incredible place I have ever taken a nap. My head bounced off the snow like that two more times before Ben had the rappel ready to go and we started moving down the mountain again. 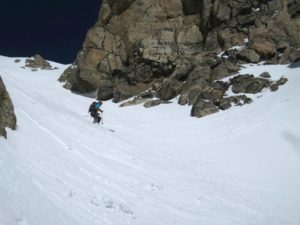 Back at the Teepee Col we realized that, while the snow on the upper mountain had stayed fairly cold all day, the lower elevations had heated up considerably. We skied the steeper portions of the Teepee carefully, releasing some wet snow sluffs as we ski cut different parts of the slope. Finally back on low angle terrain, we picked our way through some old avalanche debris before being able to open it up in some beautiful corn snow.

Skiing out Garnet Canyon felt especially adventurous as my legs resisted any command my brain tried to give them. We fought through some manky snow until we arrived again at Bradley Lake. 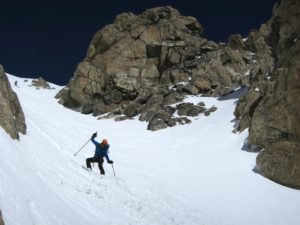 From the lake we looked back up at the Grand, all amazed at what we had been able to accomplish. We stood there watching the sun setting behind the mountains for a while, until we reluctantly threw our skins back on and started trekking the last grueling mile back to the trailhead. We reached the car at 7:01PM, 19 hours and one minute after we had left. But the adventure wasn’t over yet.

I don’t remember much detail about the next eleven hours. I know that we stopped in Jackson and ate some Mexican food. Despite being ravenously hungry my stomach also felt like it had been tied in a knot, and I struggled to put down my plate of huevos rancheros. We left Jackson and began driving south to Salt Lake City. What is normally a four and a half hour drive ended up taking over eight hours. One of us would drive while the other two slept. After about an hour, that person would pull over and fall asleep as well. Eventually one of us would wake up, blearily say “I’m good to drive,” and take over for another hour until they also pulled over to sleep. Somehow we made it back to Salt Lake City around 6AM, giving Greg a chance to get a solid two hours of sleep before he had to be at work. Success! 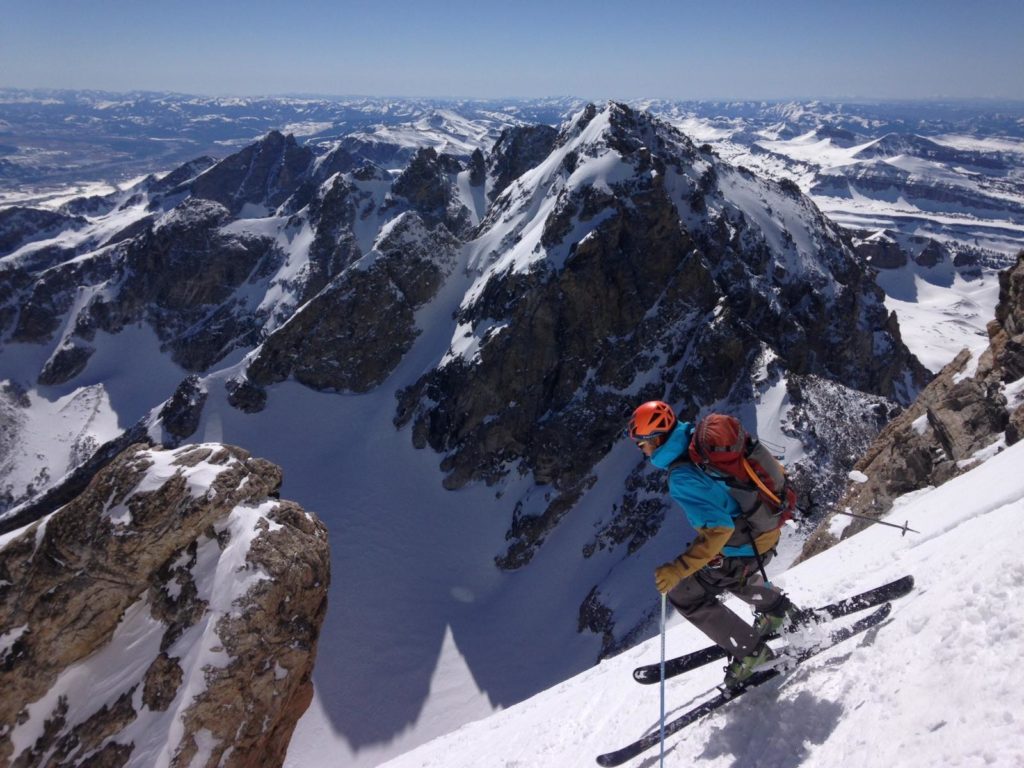 Sure, things would be easier if we as skiers were able to go where we wanted when we wanted, chasing perfect conditions at will. But I think that having to balance other obligations like work, school, relationships, etc. makes us more appreciative of those perfect conditions when we find them. If it wasn’t for the scarcity of steep lines with good snow in stable conditions, we never would have attempted the biggest objective any of us had taken on at the time as part of a 36-hour blitz trip. But when we saw those perfect conditions line up, we couldn’t resist… 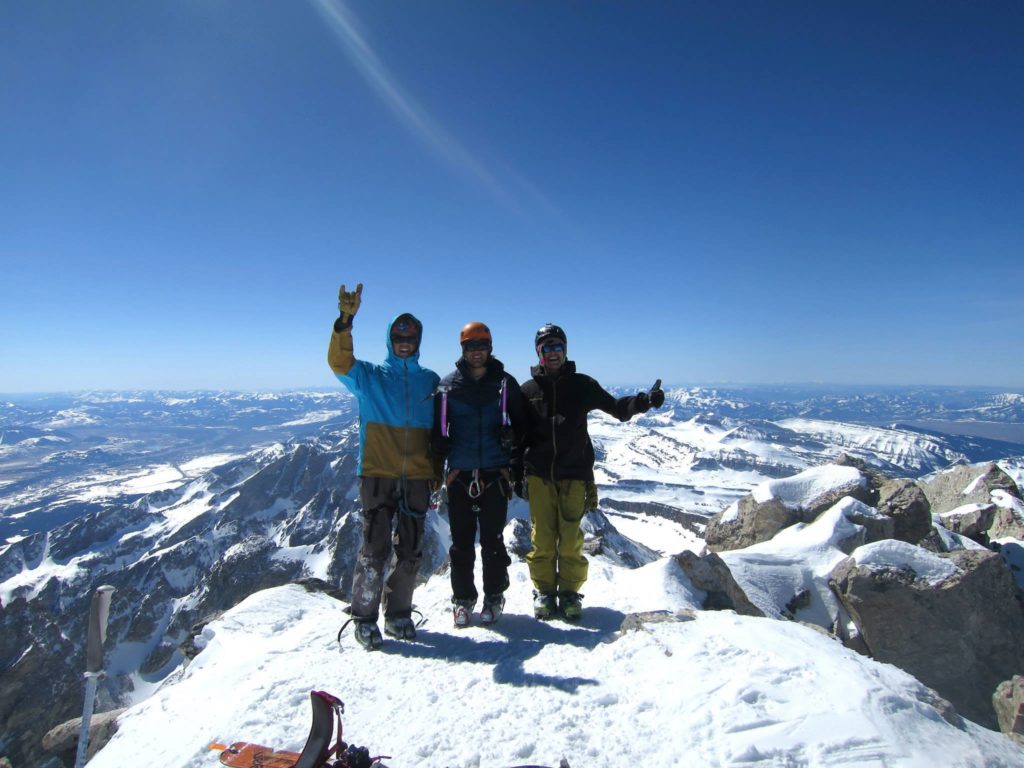 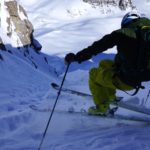 Previous post Two Days to Remember in the High Sierras 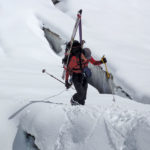 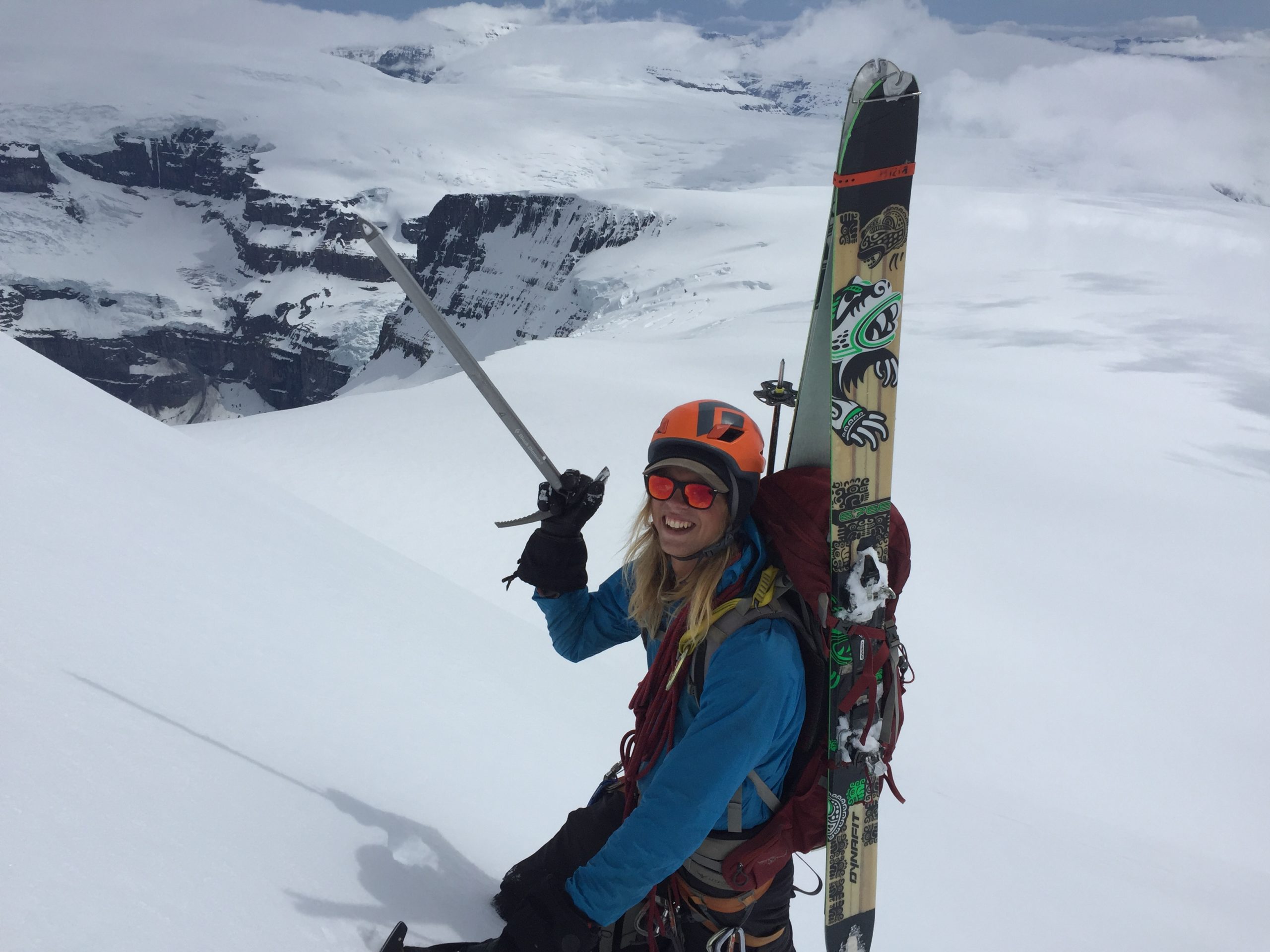 Backcountry skiing is one of the most wonderful things you can do on this planet. And we also needlessly lose members of our community every year. Keep it conservative and come home at the end of the day, every day.