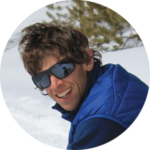 The creaky double chair of Campo di Giove sputters uphill as warm spring air permeates the valley with smells of budding artichokes and olives. Its slow deliberate movements echo to the tone of the region. Ski touring groups casually stash their cars in the small lot, purchase a one-ticket ride and an espresso at the base, and then disappear on the expansive ridgeline. High in the alpine, corn snow is set to ripen. It’s typical Europe; but in the unlikely destination of Southern/Central  Italy. We are 3 hours east of Rome in the Apennine Mountains of Abruzzo. No crowds, no overdevelopment, no jockeying for position amidst every other tourist – just skiing in the beautiful old country on ridgelines just shy of 3000m. 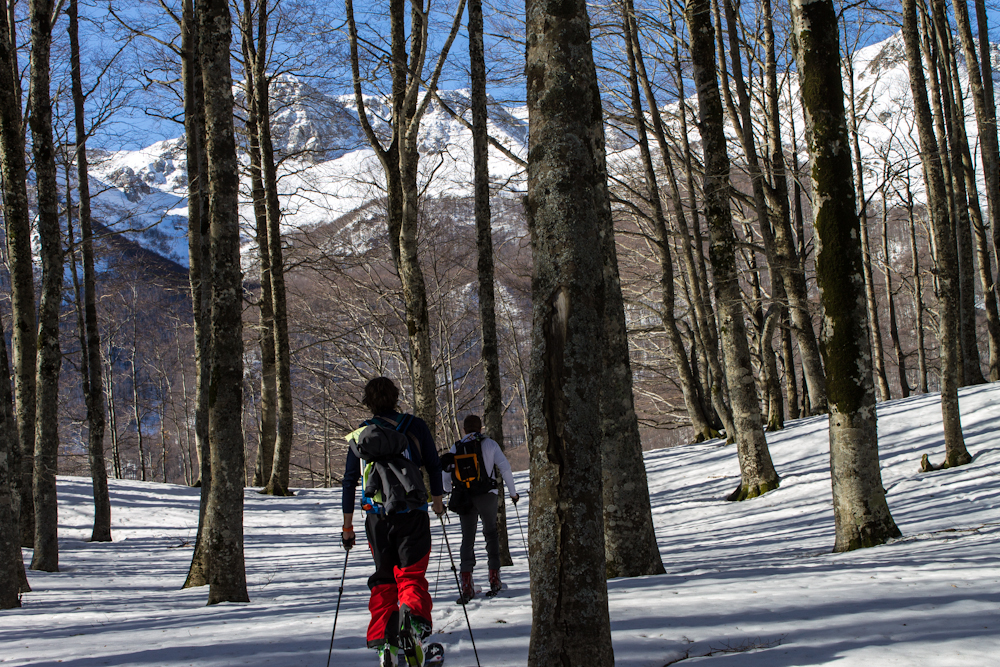 A walk through the woods and down into Lazio, Abruzzo Lazio & Molise National Park

“Abruzzese Firn,” explains one our guides, Rinaldo Le Donne. Rinaldo is skinning across the ridgeline as we gain views of the 2,912m Gran Sasso, the highest peak in the Apennines. It means corn snow, he demonstrates as he pokes at the crust beginning to soften. Clouds fill in the alpine, yet circle their way out as we are greeted to views of the Adriatic Sea. The horizon provides views of five regions of Italy, while the warm air from the sea creates a corn cycle that we’ve been harvesting all week. It has only been a few days, but our time in Abruzzo begins to meld into one, each with stunning views and new terrain. Mornings are spent sipping cappuccino and eating delicious cornettos, driving to a small ski area or trail head and gaining an emblematic panorama of the Abruzzo Apennines—a northwest to southeast ridgeline, the backbone of the Italian peninsula and teeming with options that cascade to the valley floor. The fact that nobody is skiing here baffles me, but perhaps that is the key to the preserved snow and good life of these wise locals.

Stephano Buccafusca’s father, Emilio, and the University of Naples Ski Team during the early years of the Roccaraso, Italy.

The double chair dumps us at the Tavola Rotonda. Previously the chairs used to run along the ridge, though they have since been taken out. After skinning around 10km we reached the Fondo di Femmina Morta in Majella National Park. Our objective cascaded through the massif. However, after peering over the edge without fully committing to the line, Rinaldo sees that the crux was melted out. A bummer, but in reality it wasn’t a big deal. With no pressure for skier traffic, Rinaldo, and our other guide Andrea Ciampaglia, just look further up the ridge and move to the next one. Rinaldo has toured in and around this area for over fifteen years. His ability to find good snow hasn’t failed, and we soon drop into a north-facing ramp where the snow was chalky, and as it tilted west turned into perfect corn. With no one in sight except for one other touring party, I arced onto the apron with wide smooth GS turns as the face rolled onto the next roll-over until finally reaching the tree line. We then began working our way through the lower elevation forest, while opting out of the sun baked snow in the slide path, and arrived to a 200-year-old shepherd hut. Rinaldo and Andrea start digging it out, so we can crawl in for a few photos, while explaining the sheep history of this region called ‘tratturo’.

Veiled in an agricultural and farming community, the Abruzzo region of Italy is only a couple hours drive from Rome. Since Roman times, sheep farmers used wide grassy roads called ‘tratturi’ in their annual sheep migrations from the harsh and wintery mountainsides towards the Adriatic, then returning for the lush spring valley offerings. The Abruzzo region is widely known in Italy since it is protected through parks and reserves. It contains 16 ski resorts and three National Parks (National Park of Abruzzo Lazio e Molise, Gran Sasso National Park, and Majella National Park National Park). It’s the Yellowstone of Europe. Yet intermixed within the vast tracks of land that have helped conserve native flora and fauna, including wolves and Marsican Bears, are idyllic cobblestoned villages atop hillsides. It’s as serene as anywhere in the European Alps, but the lack of a heavy handed international tourism base provides a feeling that you’re part of the community—taking in the experience like any local Abruzzese would on a ski tour.

“This was the Cortina of southern Italy prior to World War II,” explains Stephano Buccafusca. Stephano, an Italian journalist from Rome and member of a local ski club, and his wife are eating dinner with us at Rifugio Principessa Giovanna. Accompanying us on the evening and through most of our adventures in the park is co-owner of Pro Wolf, Daniele Giallonardi—the ski-guiding outfit for the region. Stephano’s father, Emilio, was part of the first group of skiers in the nearby town of Roccaraso. He and his friends would take the train in from Naples and ski tour the area while staying in the Rifugio Aremogna. Today the Rifugio Aremogna is renamed after the Italian Royal Princess Giovanna, and we eat a hearty Italian meal while reminiscing to our long tours which always end with Daniele picking us up in his Euro van, grinning ear to ear as he listens to our days’ adventure. 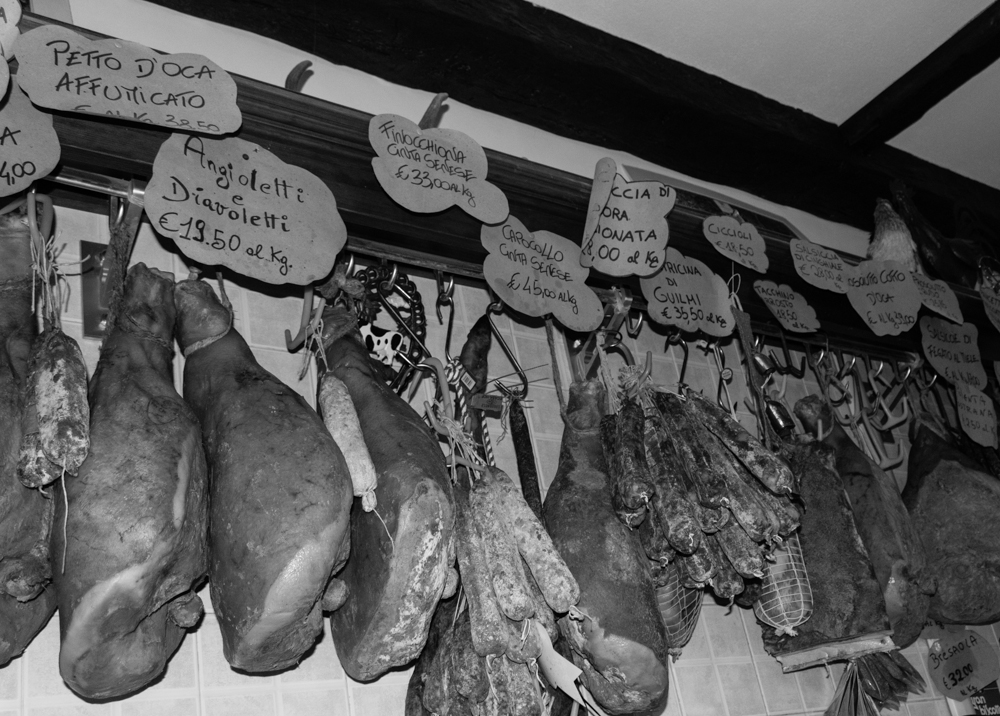 Touring through the Abruzzo Park enroute to another region of Italy, it’s clear we were in for a haul. We were dropped off with Mario Mollo, ProWolf’s other co-founder at the end of a dead end dirt road. The goal was to ski into Lazio, and the alpine’s snowfields and rock walls waited on the horizon. Spring had sprung in the lower elevations and we skinned through evenly spaced trees where purple crocuses were blooming on all available patches of grass and sun. The flowers weren’t the only ones to awaken either. And after seeing a tree with bear scratch marks and wolf tracks along the old skin track, the park’s conservations efforts were easily observed. The day prior, our crew skied at a nearby ski resort’s backcountry zone and then drove into Pescasseroli, the only town located in the Abruzzo Lazio and Molise National Park—which is one of the oldest national parks in Italy. In Pescasseroli there too waited a slow double chair, with backcountry chutes and bowls abound. However, it was late in the afternoon so we took in the late day sun in typical après Italian fashion—wine with meats and cheese, and slices of decadent pizza.

Our route towards Lazio followed the old forest then opened up into a glacial cirque that sometimes holds snow until June. Upon reaching the ridge we were greeted by a curious Chamois, who ran down to check us out, then disappeared again into the rocks and tall grasses that were poking out of the snowpack. Sitting on the crest we casually switched into ski-mode for the descent, while taking in the views of the valley fog and a myriad of ridge tops to our south. The southern mountains had less snow, but combined with the fog and bluebird skyline the view seemed like it was plucked from a J.R.R. Tolkien novel. We crossed into Lazio halfway down our descent, and then followed a sub-ridge and into a ravine that popped us out at a small ski area and rifiguio with abandoned ski lifts.  The spring warmth had shut them down, but our good fortune allowed us to ski right up to the snow line, and just in time for an Italian mid-day lunch of pasta, pancetta, and freshly picked wild spinach. Though as we drove back into the Abruzzo region, the snow capped mountains and cooler air were a welcomed reprieve from the strong March sun accompanied by a cozy catnap on the car ride back. 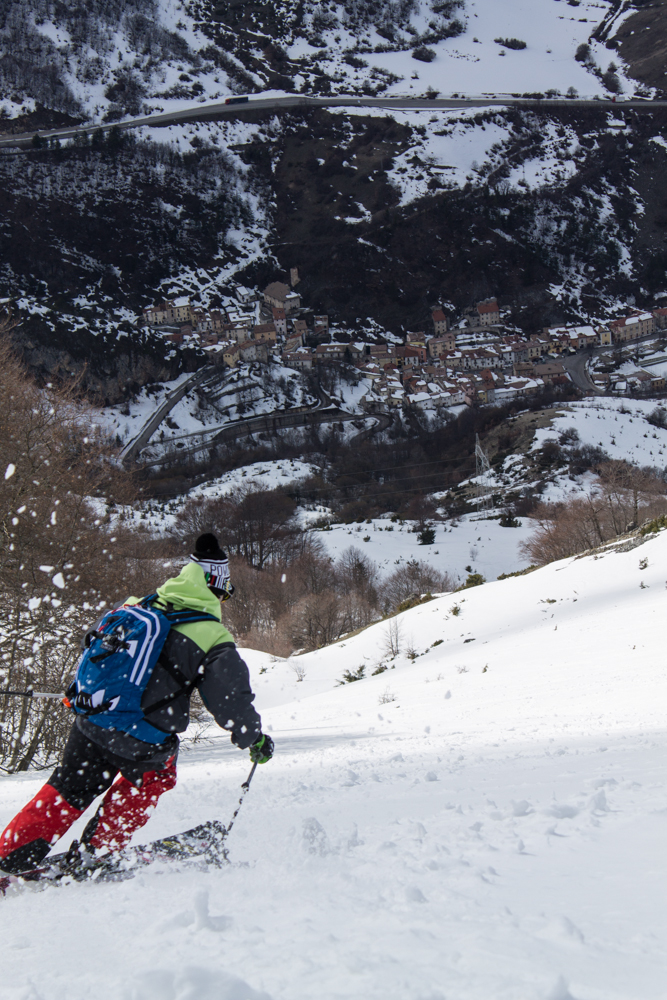 Strolling through the streets of Rivisondoli, my wife and I are struck by the quiet and perfect sanctity we found here. Evening walks are still part of the daily routine in Italy, and we wander through small cobblestone alleys and stairways as the chatter of the evening echoes in the distance. We pass by a cantina, where a local butcher is drying his sausage and other delicious pork cured meats. Ski touring here and staying in these classic medieval villages has been somewhat of a throwback. A return to the simple life, where these lucky individuals live every day and where we were fortunate to have met and skied with them.

On our final evening the sense of community couldn’t have been more apparent. Every few weeks Pro Wolf organizes a night snowshoe, which begins at the base of the Aremonga ski area near the town of Roccaraso. Following a thirty minute walk through the woods we arrived to Baita Paradiso, a popular spot for a mid-day “snack”—in Italy energy bars are replaced by antipasto, when skiing the resort. The cozy confines of the log structure, evening atmosphere, and the whole crew made for a perfect evening. Daniele, Mario, our guides and their immediate family all came along for the night. Our tired legs and grins from a week of touring the parks in perfect corn, melt into the night as we drink wine and eat an Italian meal in the heart of the Apennines. 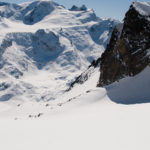 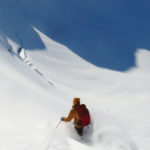 Next post Off the Map in the Chigmit Range 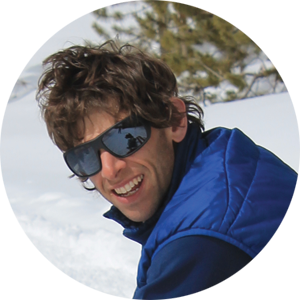 Thanks , always interesting to talk about skiing. We hope to be able to ski together again . Greetings from Abruzzo and Rinaldo