Why We Do What We Do

“Why the hell would you hike up a mountain to ski, when you can just ride the chairlift?”

I’m asked this question almost every time I tell someone my life’s passion is backcountry skiing. Folks utter this query with aghast expressions as if ski touring is the most absurd activity on the planet. I aim to defend backcountry skiing, but encounters like these also have an unexpected result: they force me into self-reflection, and I wonder, why do we backcountry skiers do what we do?

From the perspective of somebody who exists far outside the circle of backcountry skiers and splitboarders, I can see why anyone would think we’re crazy to expend so much physical energy to hump ourselves to the top of skiable terrain for only a few runs a day, when we could easily ride the lifts at a resort and get 20-times the amount of downhill vertical. Hell, just trying to explain to a lay-person how Dynafit bindings, walk modes, and climbing skins work requires flow charts, Powerpoint presentations, and a round of Charades before they begin to grasp the concept (and even then they just politely smile and nod in a vain attempt of pretending to get it.)

Why do we do that to ourselves? In answer, I could wax poetic about horizons free of lift cables, the lack of ski-area crowds, or the freedom of skiing terrain without the restriction of orange ropes and closed signs. I could ramble on about the hiss of recrystallized snow beneath ski tips, how aspen forests are silent as a library when snowflakes fall without a hint of wind, and the dizzy high one gets when standing atop a hard-climbed peak under a cobalt sky. I could even paint mental pictures of a solitary skintrack weaving among evergreens, the thrill of cutting turns in perfect-density powder, or friends whooping with joy as they look back at their signatures carved into a canvas of white.

But I won’t do that. Because of my day job as videographer of an outdoor recreation T.V. show, those confounded by backcountry skiing are usually members of the hook-and-bullet crowd… you know, those who kill animals for fun. For them, I’ve rehearsed a different answer.

A recent example takes place in the middle of a wheat field in Southern Idaho. There I am, hunkered down in a frozen mud hole with my camera, shivering, yet trying not to move a muscle as flocks of geese soar overhead. They dive to a low altitude, cup their wings, and drop their feet like landing gear on a plane; fooled by a small fortune of plastic decoys on the ground combined with off-key, throaty goose calls. A sudden cry of, “kill the bastards!” echoes through the dawn. All at once, camo-clad hunters pop out of their holes like Whack-a-Moles and obliterate the birds with enough shotgun blasts to give me instant PTSD. After retrieving feathered, bleeding carcasses, the nearest hunter holds two limp geese up by their slender necks, looks me in the eye, and asks, “So what do you think about us crazy waterfowlers?”

I politely tell him I think they are indeed crazy. It’s obvious that, despite my ill-fitting camo jacket, I am not a hunter, and this is my first experience sitting in frozen mud holes while witnessing the total annihilation of an entire goose family. So the conversation inevitably turns to what I do for fun. I tell him I’m a backcountry skier and, per usual, he asks the question: “Why the hell would you hike up a mountain to ski, when you can just ride the chairlift?”

I return the hunter’s eye-level gaze and say: “Why do you sit in frozen mud holes for hours to shoot a few geese, or hike for miles in the woods to hunt big game, when you can just buy meat at the grocery store?”

His response is identical to every hunter I’ve asked. He waxes poetic about hunting not so much for the meat, or trophy antlers to hang on a wall, but simply to be outdoors. He rambles on about getting lost in the solitude of road-less terrain, the scent of pine needles in cold mountain air, and witnessing wildlife in its natural state. But most of all, he paints mental pictures of time spent with friends and family, making memories and sharing stories. He concludes that it may sound cliché, but it isn’t about the destination, it’s about the journey.

And that, I say to him, is exactly why I backcountry ski. So now what do you think about us crazy backcountry skiers? Maybe we’re not so absurd after all. 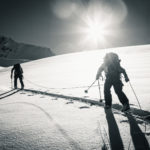 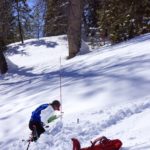