Most of us like to play in the mountains, and most of us like to play in the rivers as well.  Intuitively, of course, we know that they are interconnected:  snow falls in the mountains, melts, and flows into creeks that join to become rivers, and even mountains that don’t retain enough snow to feed rivers with runoff generate cloud lift that in turn creates rain that feeds rivers.   But despite their connection, we as recreators don’t typically use both rivers and mountains on the same outings; we typically hike, run, or ski through the mountains, then later, on different trips, float down the rivers, sometimes in opposing seasons.  However, with the advent of lightweight backpacking gear, lightweight ski gear, and packrafts it’s now possible to seamlessly connect the highest peaks with rivers via ski rafting. 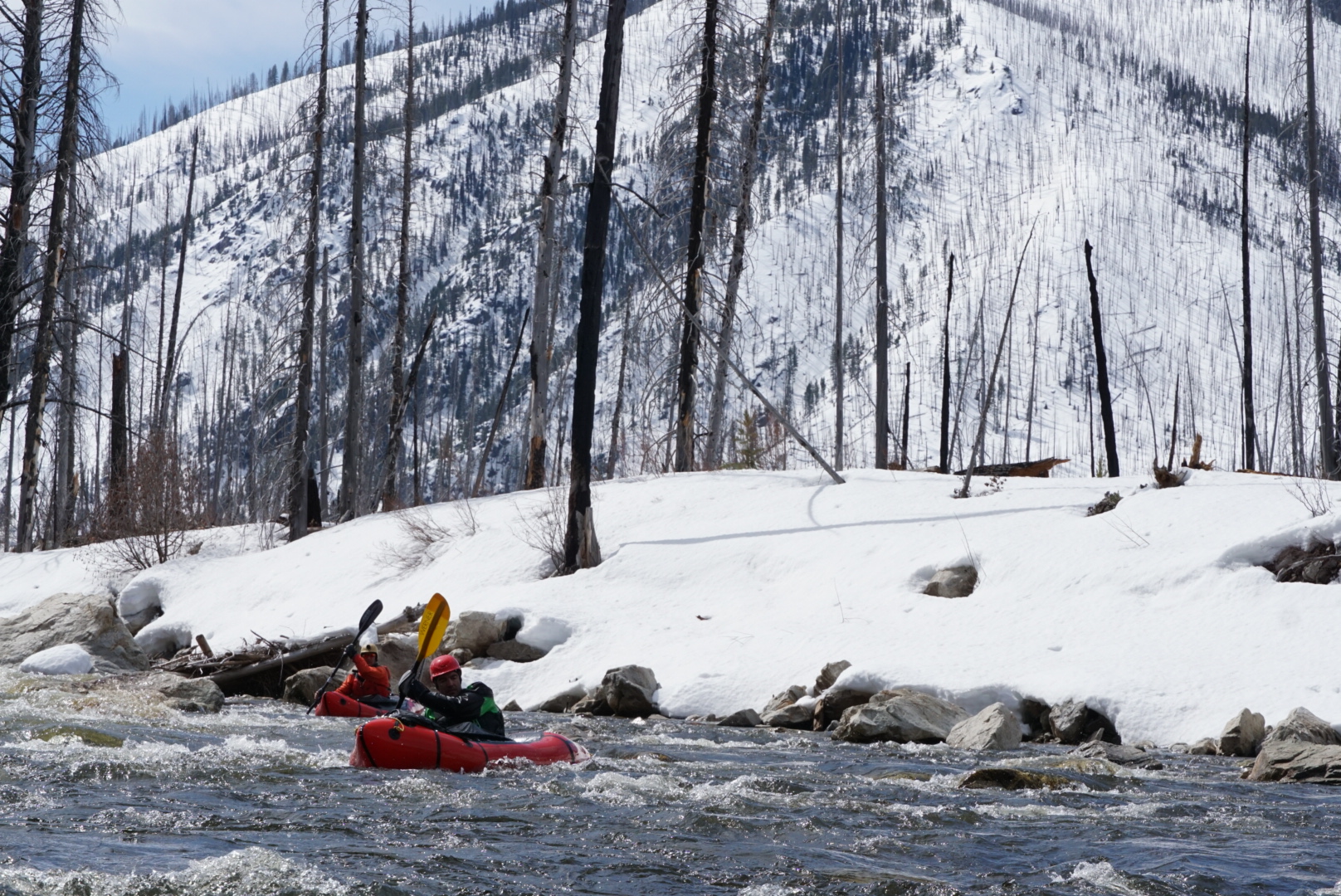 Packrafts were generally born in Alaska, where adventurers on long ski and bike traverses needed to cross un-wadeable rivers, and the early versions were tiny, crude, and practically disposable.  Over the last decade, however, they have evolved dramatically with new materials, shapes, and features to the point where there are now styles that are capable of running class 5 whitewater, yet still weigh less than 10 pounds and roll up to the size of a 2 man tent.  Given the weight and bulk of plastic kayaks, rafts, and even inflatable kayaks, getting to the put in of a river mandated either a road and a car or a very arduous schlep, which limited river opportunities.  But the new generation of packrafts enables river runners to very easily walk into rivers that have previously been inaccessible.  And they allow access to rivers that you can ski into. 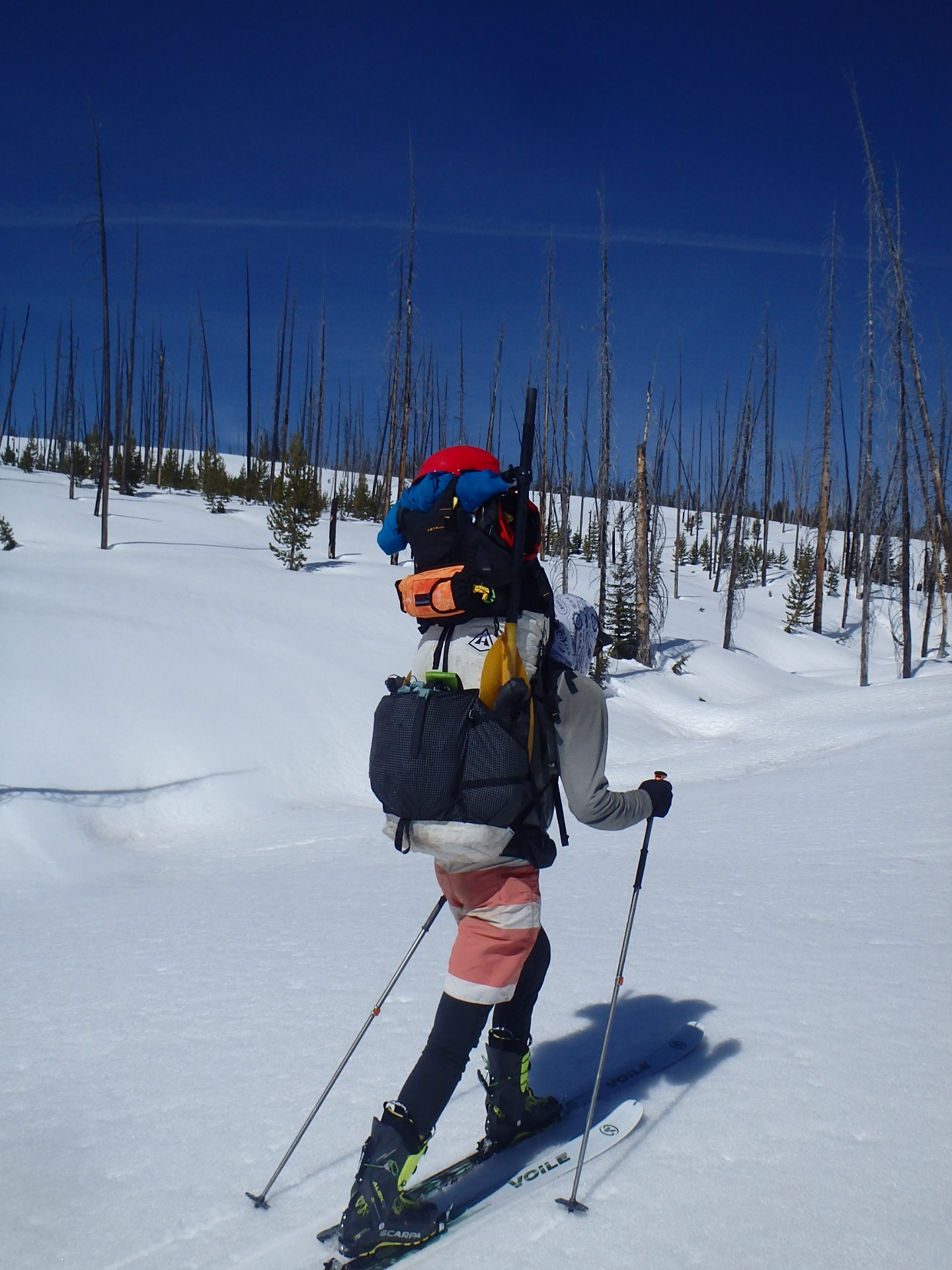 Our Spring 2021 trip was the brainchild of Jeffrey Creamer, a former geologist professor who has foregone the academic life to chasing rivers around North America; Jeff is probably the world’s first packrafting-specific dirtbag.  He got into packrafting while living in Santa Barbara in grad school, and after moving to Durango to teach not only turned up his paddling skills on the many creeks and rivers in Colorado but also started skiing as well.  Learning them both simultaneously led to the obvious conclusion for Jeff:  why not combine them?  The San Juan Mountains – with the Piedra and Animas rivers and tributary creeks – lent themselves easily to skirafting, and after seeing the potential, he cast his views farther.

A quick glance at a map of Idaho shows a huge swath of green in the middle of the state, which is home to one of the largest near-contiguous series of mountains in the country:  the Sawtooths, Pioneers, Boulders, Smokys, White Clouds, Salmon Mountains, and Bitterroots are all high and vast, and wiggling through them are some of the most famous rivers in the US:  the Salmon, Middle Fork of the Salmon, and the Selway.  With such iconic rivers running deep in the canyons between these big mountains, the terrain lends itself well to the concept of springtime skirafting. 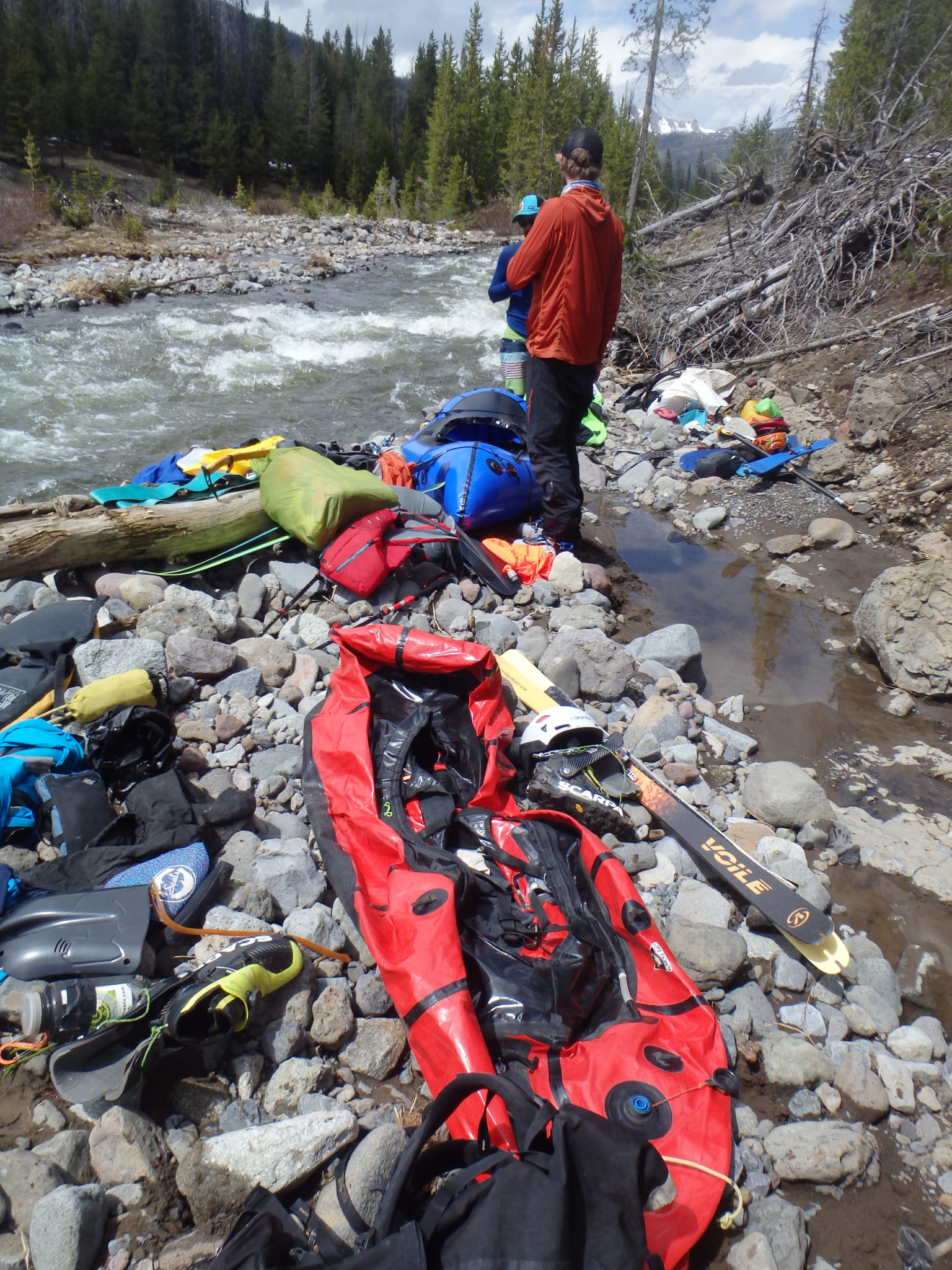 And thus seven folks gathered in Stanley, Idaho to do an ambitious full crossing of that big green swath.  The route – put together by Jeff  -was to do a lengthwise ski traverse of the Sawtooths, transition to packrafts where the Sawtooths drain into the headwaters of the Middle Fork of the Salmon, float that river down to the main Salmon, hike out of the Main to the snowline and transition to skis, ski through the Salmon mountains to finally descend into the Selway river drainage, get back in the boats, and float the Selway out to the Clearwater and the highway.  An ambitious, long, and somewhat gear-intensive trip that depended on fitness, skiing ability, paddling skills, adequate river flows, and favorable weather to complete. 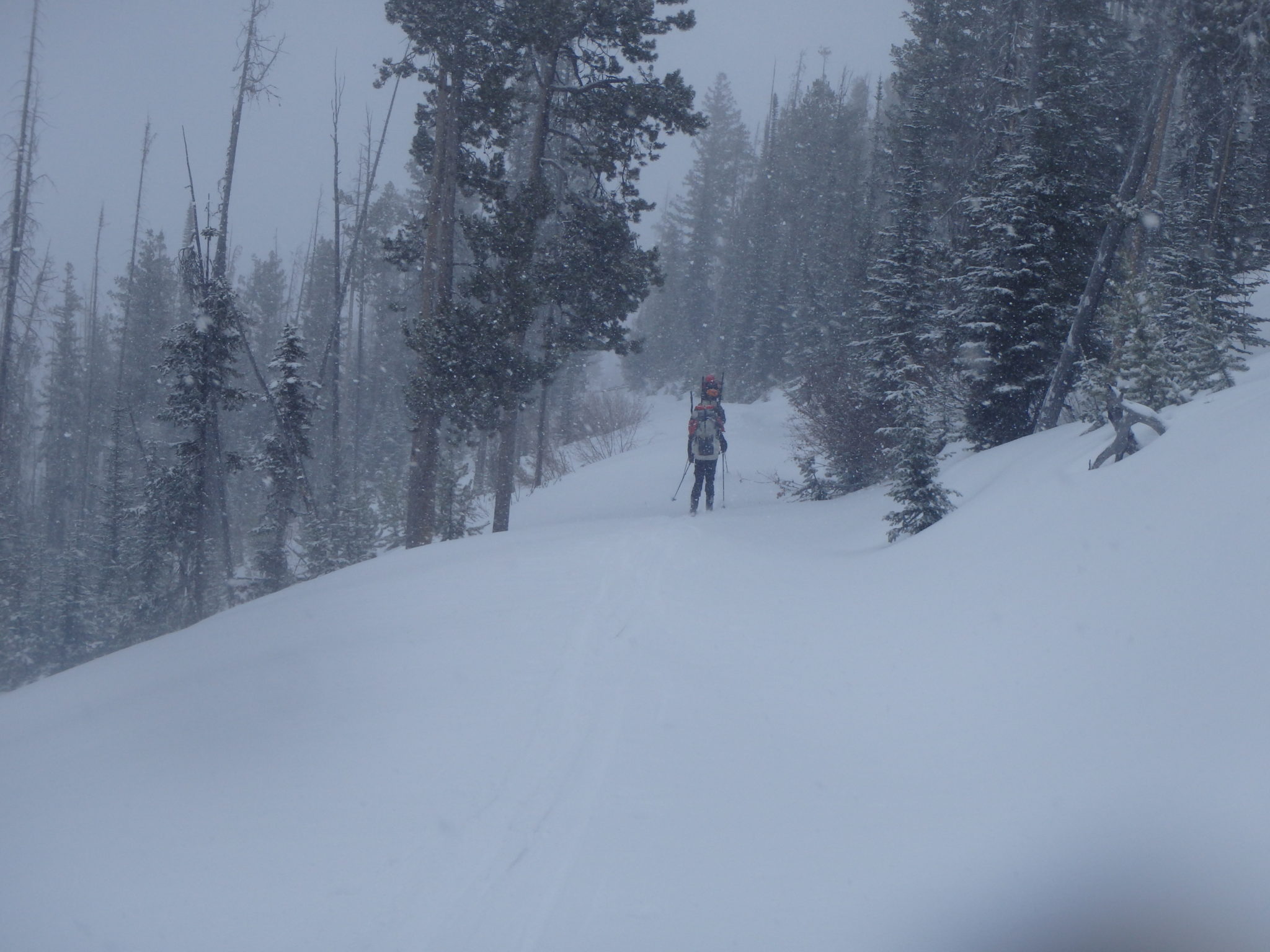 Our initial weather forecast was indeed encouraging:  some very light precip followed by plenty of high pressure, which meant not having to slog through either deep new snow or punchy spring snow that doesn’t refreeze due to cloud cover.  The only thing that made us a bit nervous was that along with the lack of storms it was “unusually cold” for April; being that it Stanley prides itself with being the coldest town in the country, unusually cold for the adjacent mountains sounded pretty dang cold!   Some of us were winter-camping newbies and this news was a bit daunting, but two of our crew are Iditibike veterans who veritably scoffed at the prospect of camping in single digits, so it kinda evened out.

The Sawtooths are a magnificent and aptly-named range; as seen from the valley floor the skyline is a jagged  – well, saw – of mountains piercing the sky, and once in heart of the mountains a nice route presents itself by going up and over many fantastic passes, most of which still held old recrystallized snow.  Yes, the nighttime and morning temps were chilly and warmth management was a factor, but nightly roaring fires dropping into their own holes and doubling up on sleeping pads helped bridge the gaps when the warm sun was out.  And the cold temps kept the snow surface frozen longer, enabling more efficient travel. 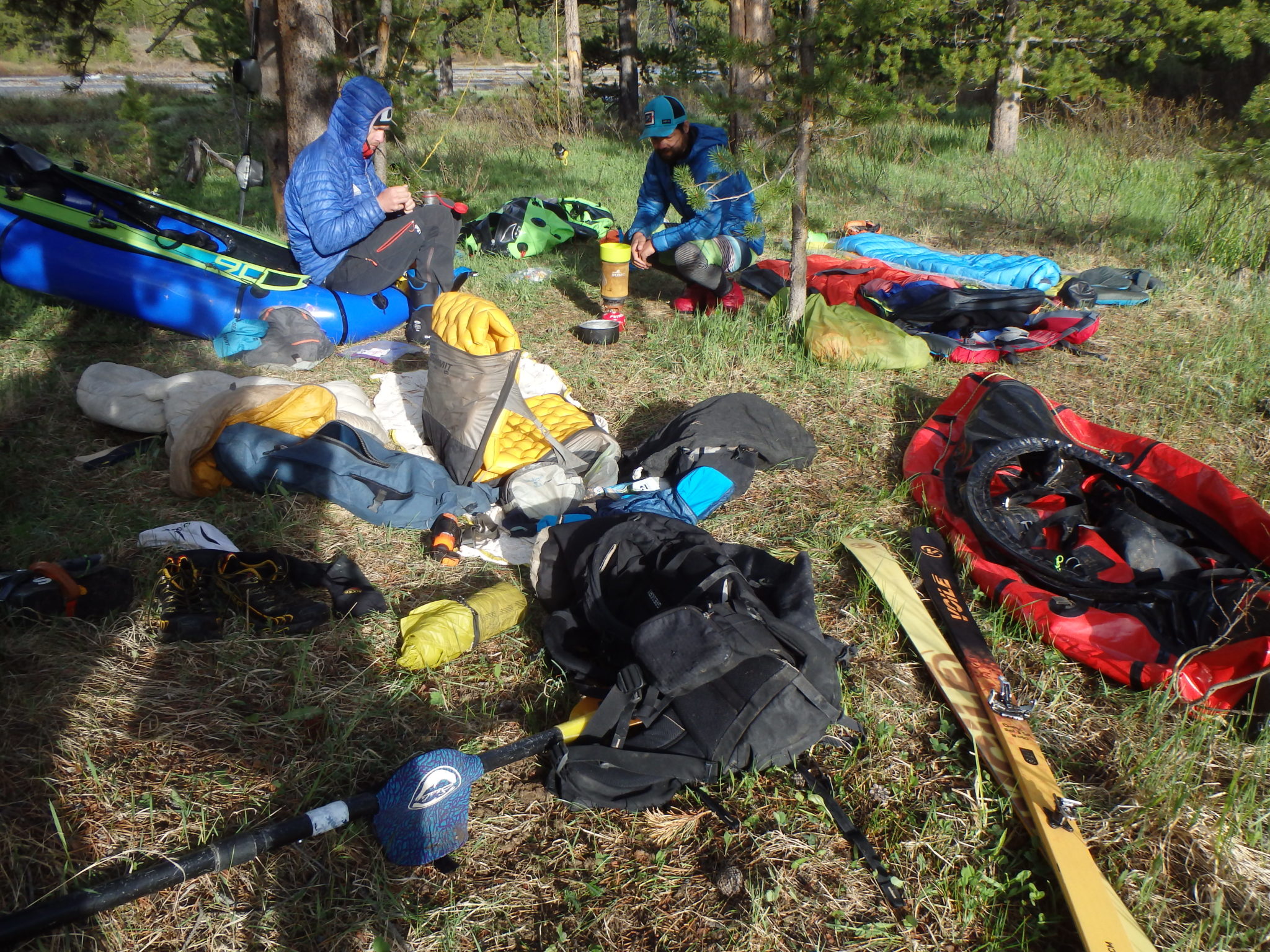 Four and a half days of working our way 50+ miles through the Sawtooths brought us to Highway 20, which connects Stanley to the Payette area, and is where Marsh Creek discreetly bubbles past on its way to becoming the mighty Middle Fork.  With complicated shuttle logistics we had arranged to have a couple of cars there, and our boats awaited us.  A huge roadside gear explosion occurred, and soon enough our ski team had transitioned into a bunch of paddlers.

Modern packrafts have an airtight zipper on the back that opens up the entire inside of the tubes, and this is where you store your gear.  And fortunately, the boats are just long enough that they’ll fit skis up to 178cms long, as well as boots, collapsible poles, etc.  Some care needs to be taken to avoid various sharp edges from protruding into the plastic where a rock might scrape a hole in the fabric, but wrapping skis with skins, backpacks, etc works quite well.  In this case, because we were floating for a few days and not carrying our food, we went a bit big on the food, so dragging our laden boats across the snow to the river was arduous!  And even knowing that we’d be eating down some of that weight, it was still hard to imagine carrying much of that in a few days. 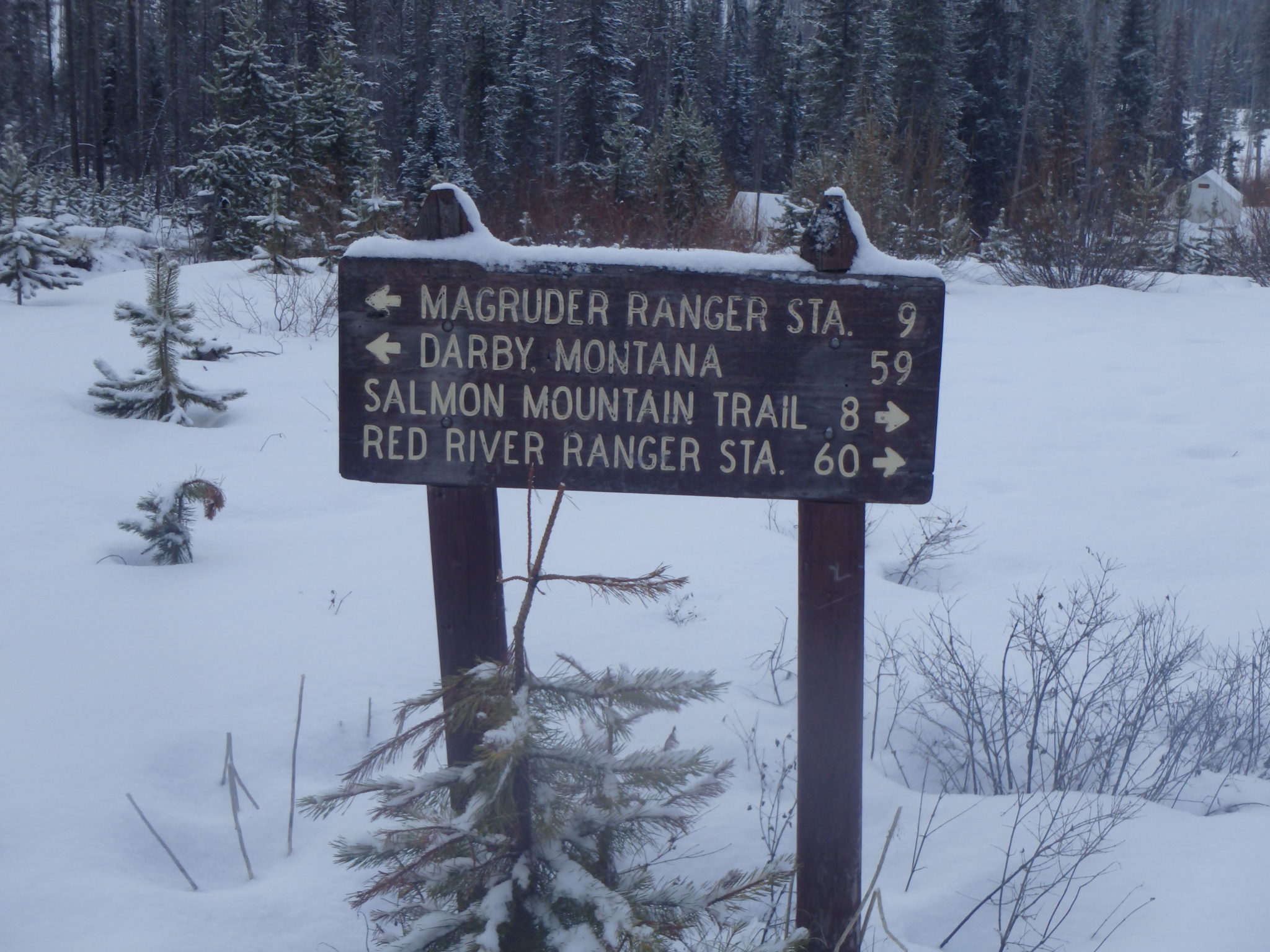 Our cold but clear weather continued, and by the end of our first day on the water we were able to camp on a small patch of dry land, which was a welcome change from the cold of camping on snow.  The Middle Fork is famous for its hot springs, and while we camped at one of them, the most famous – Sunflower, with its hot shower spilling over the rocks  – was already taken by the only other crew we saw on the entire trip!  We silently paddled past, wriggling our toes and paddling hard to try to generate the warmth that we had hoped the hot spring would provide.

And paddle we did.  The Middle Fork is 100 miles long, and between wanting to take advantage of the good weather and concern about having enough food for the remainder of the journey (as well as staying warm!) we paddled pretty hard for 3 days to get to the Main Salmon.  We ditched a little gear and our obligatory personal “groovers” (shit cans) to be retrieved later, floated down the Salmon for a few miles past the typical Corn Creek put in, and at the first side canyon downstream we took out and created yet another gear explosion as we transition back from floating to walking, and ultimately to skinning. 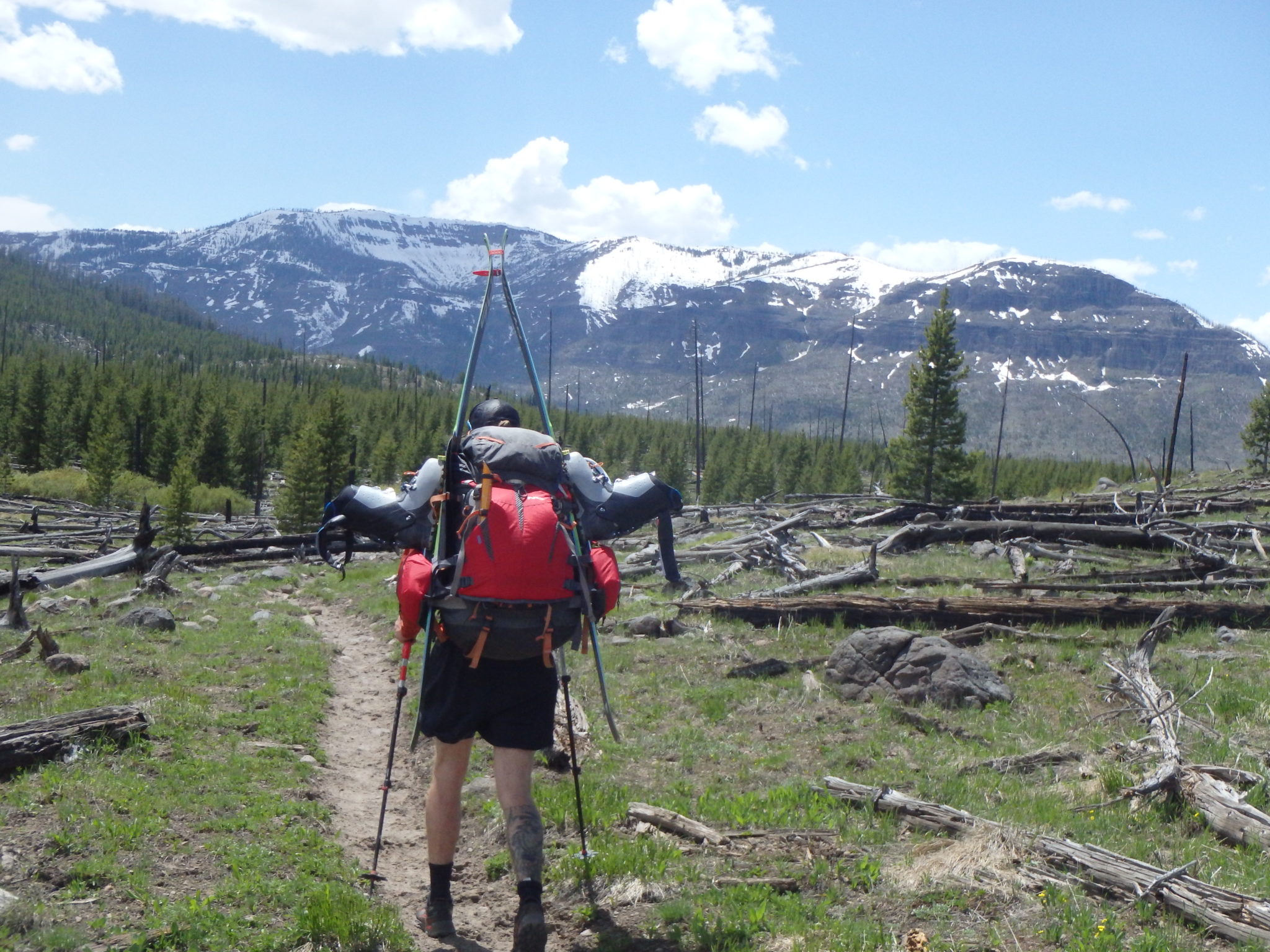 A few thousand feet up we hit a pretty abrupt snowline and strapped on our skis.  Some folks have asked, “How heavy were your packs?” to which I’ve responded:  “really damn heavy!”  But it was nice to at least to get the skis and boots off our backs, and after a long winter of skiing, the skinning felt pretty natural and we continued to take advantage of the unusually long high pressure to shuffle through the Salmon Mountains.

While the Salmon Mountains aren’t quite as craggy and dramatic as the Sawtooths to the south or the Bitterroots to the north, this zone was the biggest concern for us, because we hadn’t been able to find much beta on this area and it was definitely the most remote section, so any problems:  gear, injury, weather, etc. – would have the most acute ramifications for our trip.  There is a “road” going through this area:  the Magruder Corridor, but this is just a gravel road that has hundreds of miles of the vast Selway-Bitterroot Wilderness to the north and the Frank Church Wilderness to the south, and the only thing we – and the wolves, whose tracks we saw  -used it for was to navigate our way into the Selway.

After a few days of skinning through perpetual alpine/burn terrain we finally started dropping into the Selway drainage, going on and off snow and dirt until finally we put the skis back on the back and walked down to the bridge where the Selway blasts underneath it.  Unlike the Middle Fork with its higher-elevation drainage, mid-April flows on the Selway are typically at least medium, and the Selway is well-known as being a class 4 run at medium flows (5-10,000 cfs). 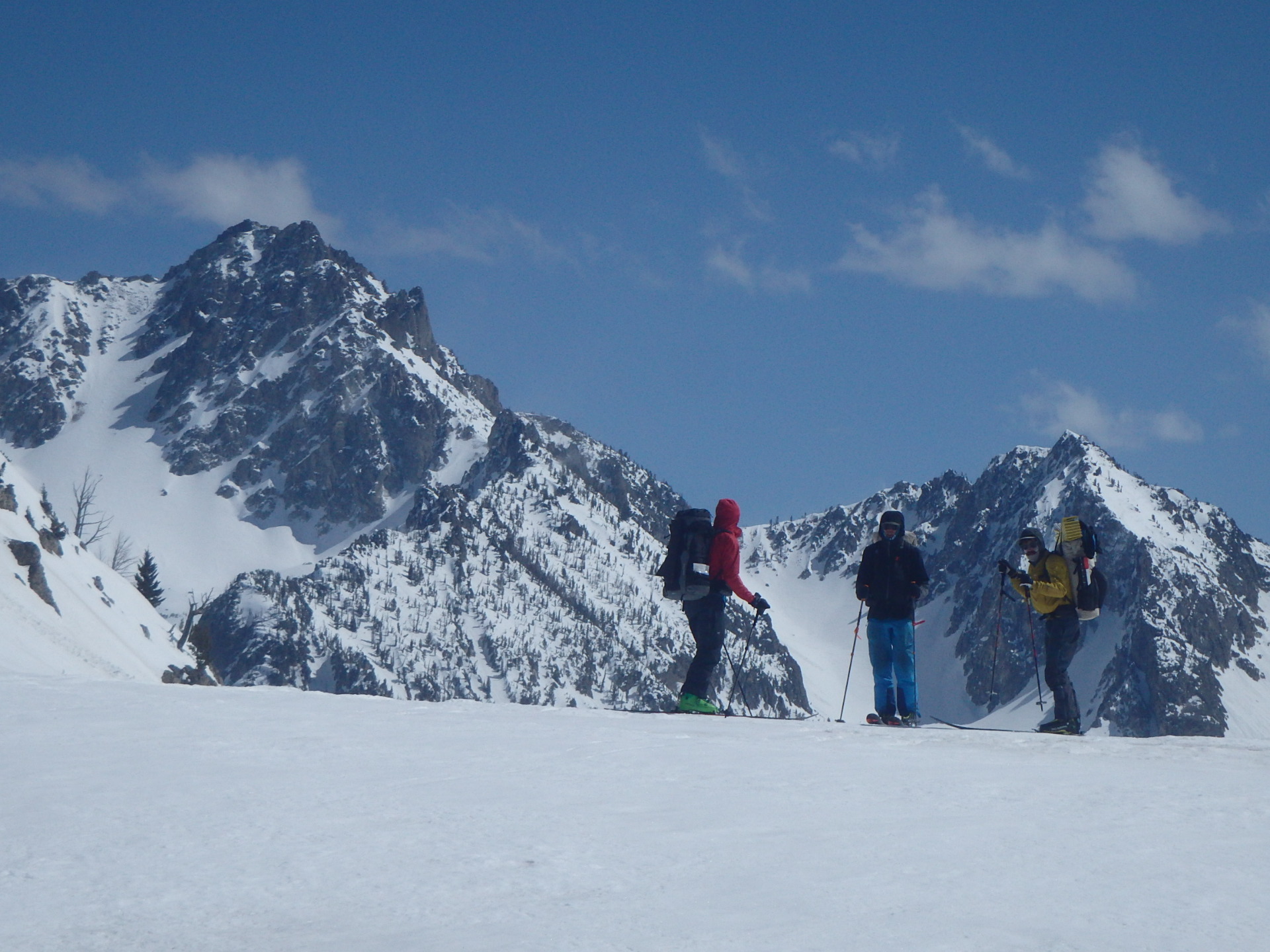 Once again blessed by good transition weather, we had our finally gear explosion transitioning back to paddling, and soon enough the sore shoulders were a distant memory as we bobbed and weaved our way through the rapids of the upper Selway.  The Selway is a pretty special river; during the short season that it is accessible (via a snowy pass) it has enough water that only one commercial and one private launch is allowed per day, and even seasoned western river runners typically have had zero to two trips down it.  But if you skiraft it before the May 15 permit season starts, it can be floated every year, and it’s unlikely that you’ll be sharing the river with any other trips (unless skirafting really takes off!).

After a few days of fairly arduous skiing we were happy to be sitting in our boats for a few days, navigating the crystalline water that formed into some pretty big and infamous rapids:  Double Drop, Ladle, and Wolf Creek.  All of us had at least one swim, but the beauty of packrafts is that they enable quick re-entries so they were no problem (except for couple of folks who neglected to fully zip their drysuit’s pee zippers!). 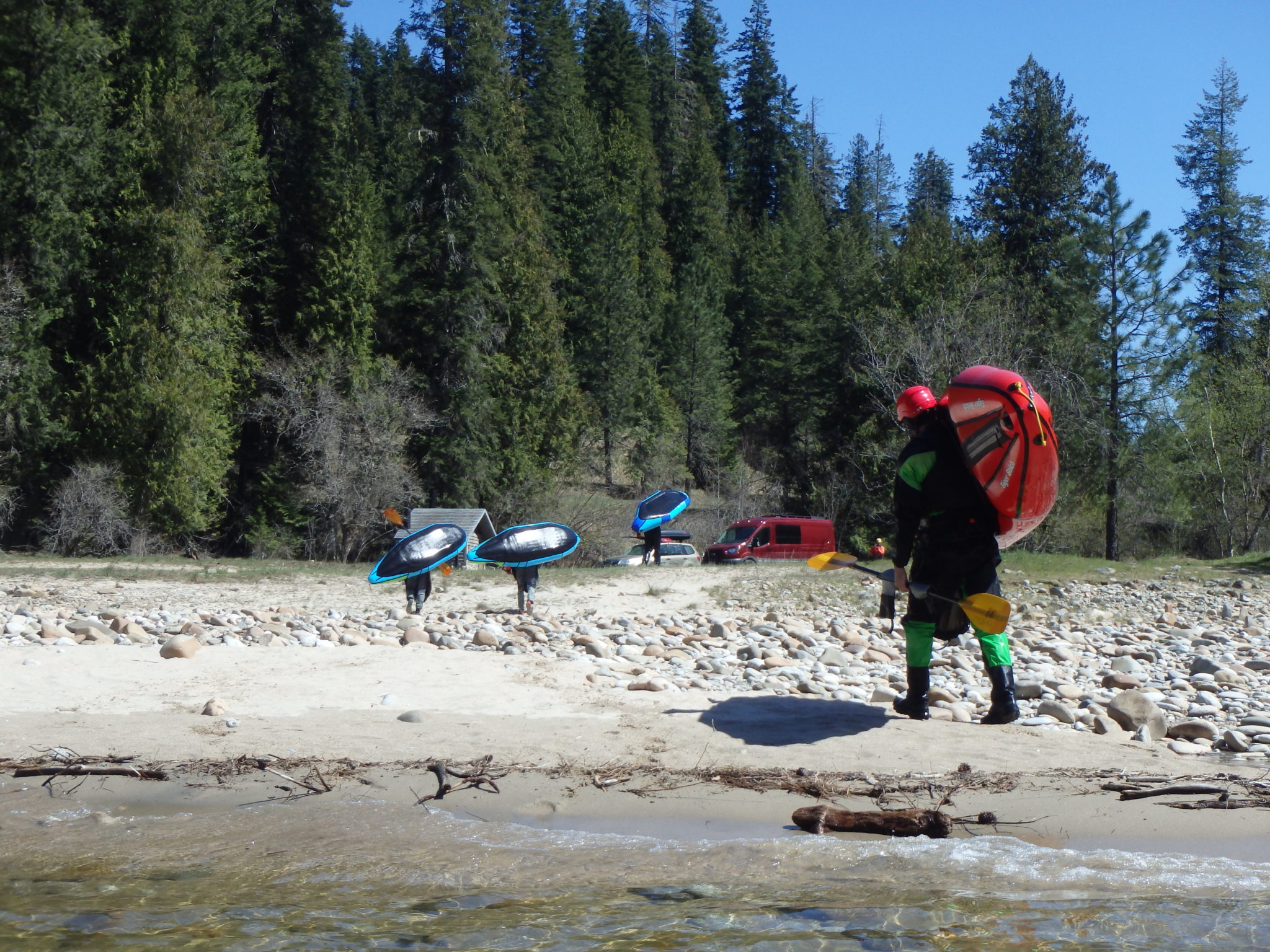 Finally, after 310 miles and two weeks we floated to within a couple of miles of the Clearwater River and Highway 12 that connects Missoula to western Idaho, with a  few of us eating our last handfuls of gorp not far above the takeout.  Amazingly, we had chosen an unprecedented April dry spell; we love snow and for sure without it we could neither ski nor paddle, but it was nice to avoid the storms that makes that nice snow for such a journey.

It may take a bit for skirafting to catch on, but with the right combination of gear, conditions, skills, and partners it can enable some fine combo adventures through big terrain. 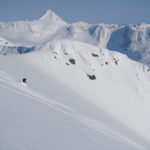 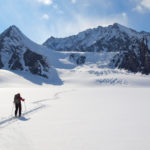 Next post Recognizing the Miracle of the Mindful Turns of Skiing